April 26, 2021, marks the 35th commemoration of the most significant atomic accident in history. With nearly a quarter of its territory affected by radioactive fallout from Chernobyl, Belarus remains the most contaminated country in Europe. Today, scientists continue protecting civilians in the regions marked by the disaster. 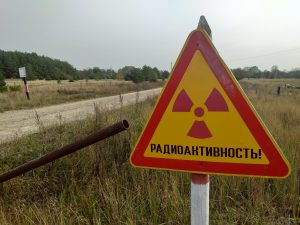 Near the green and yellow border crossing leading to the exclusion zone, the sign announces a measurement of 0.52 microsievert (μSv) per hour. This corresponds to low doses of radioactivity, but these, accumulated every day over the long term, can become harmful to an individual's health.

There is virtually no human activity left in the vicinity of the 96 villages that occupy the Belarusian exclusion zone. The exclusion zone extends within a 30-kilometer perimeter around the Chernobyl plant. Following the explosion of the reactor N°4 of the nuclear power plant, on April 26, 1986, more than 20,000 people on the Belarusian side (350,000 people including the Ukrainian and Russian zones) had to leave behind their houses and a land that had become uninhabitable. 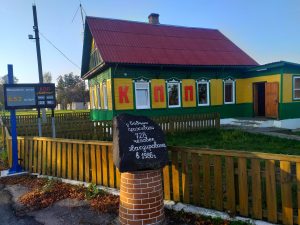 The site is now frequented by scientists who study the development of flora and fauna consisting of about fifty species of wild animals. The security teams make sure to contain the possible forest fires that threaten to ravage the reserve. Their fumes could carry nuclides, such as cesium-137, to inhabited areas.
In December 2018, this part of the Belarusian territory, located in the Polesie State Radioecological Reserve, became accessible to tourists accompanied by a guide certified by the Belarusian government. Only a few dozen groups per year visit the area for the time being. Since the opening of the exclusion zone on the Ukrainian side in 2011, it has seen a steady increase in visitors to reach a record 70,000 visitors in 2019.

Is there a health risk to visiting the exclusion zone?

The radioactivity is not visible, and it has no smell, but it is everywhere and with varying levels. In the former village of Orevichi, the dosimeter measures a radioactivity rate of 2.21 μSv/hour (or 19.3 millisieverts -mSv- per year). In France, the Institute for Radiation Protection and Nuclear Safety (IRSN) sets the rate of 10 mSv/year (three times the annual dose received by the French population) as the level at which protective measures for civilians become necessary. According to Peter Philon, director of the Pripyat Tour agency, going to the exclusion zone for a day is equivalent to receiving a radiation level similar to an airplane trip. These highly radioactive soils, full of cesium-137, strontium-90, or plutonium, make it impossible to establish human life in the long term. As for the Chernobyl power plant, 12 km away from the ghost village of Krasnosele, it can still be seen on a clear day from the top of a guard tower. 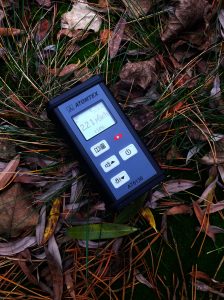 The Belrad Institute for Radiation Protection

This institute remains the only non-governmental organization in the country working to prevent and protect about ten thousand people, for a population of about 1.1 million people living in the contaminated territories outside the exclusion zone, mainly around Gomel Mogilev and Brest.
This independent institute, founded in 1990 by physicist Vassili Nesterenko, is financially supported by some foreign associations. Radioactivity is invisible to the eye but is still present in the Belarusian soil. Cesium-137 is one of the most worrying elements since it can be found in foodstuffs from harvesting and farming, such as berries, mushrooms, and milk. In 2021, part of the population living in these rural areas will continue to eat farm and forest products that may harm their health.

Today, the institute has 26 members and is headed by Alexei Nesterenko, who continues the work started by his father. The institute, based in Minsk, has established and controls eleven laboratories in the contaminated territories, which provide measurements of the levels of nuclides stored in foodstuffs. Another laboratory of anthropogammametry allows measuring the level of radioactivity present in individuals. Belrad advocates protective programs to improve the health and well-being of children affected by radioactivity. For example, pectin, a food supplement made from apples, can absorb some cesium-137 assimilated into the children's bodies. It has been observed that pectin can reduce the level of nuclides in the body by up to 65%.

The primary concern is the internal contamination observed over the past thirty years. By feeding daily on so-called "dirty" products, children can develop cardiovascular diseases, leukemia, and other forms of cancer. Even today, the rate of becquerels (Bq) per kilo measured in the bodies of thousands of children exceeds the admissible doses. According to A. According to A. Nesterenko, it would take less than 20bq/kg not to be concerned, but in 2020, out of 10,000 children in 60 schools, 70% had a higher level. It has been observed that from 50bq/kg, lesions can appear in the organs. However, the possibility of internal contamination and its harmful effects on health is ignored by the Belarusian authorities. They have stopped all financial support to the Belrad Institute since 2001.

Cesium-137 will gradually disappear from the soil. It has already lost half of its radioactivity. It will lose half of the remaining 50% in the next thirty years, leaving no discernible trace until after two hundred years. Many other components, such as half of the plutonium, will take about twenty thousand years to leave the soil. 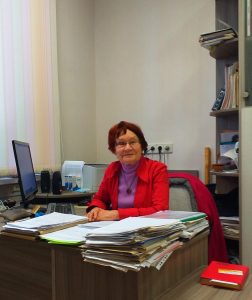 Professor Roza Goncharova, a member of the Belarusian Institute of Genetics, raises a broader issue of internal contamination with cesium-137 through her studies on the influence of contamination on the human organism via low doses of radioactivity. According to her research, the human metabolism could be altered in the genetic system, which, passed on through future generations, would increase the risk of heart disease and leukemia. Having studied the effects of radioactivity on the genetic heritage of 22 generations of rodents between 1986 and 2006, she noted aberrations at the chromosomal level and an increase in the loss of embryos up to the last generation, which was less exposed to radioactivity. Until now, no health organization has recognized the risk of a possible mutation of the human genetic heritage and its intergenerational transmission due to radioactivity.

Unable to be heard by international institutions and the Belarusian authorities, A. Nesterenko and R. Goncharova found other allies. Roza Goncharova insists on the exceptional humanity and soul of the French ecologist Solange Fernex, who put all her forces to save the Belrad Institute. She died in 2006 and created the French association Enfants de Tchernobyl Bélarus, which financially supports the projects of the Belrad Institute. Alexei Nesterenko likes to remind that the improvement of the situation is based on the help given by the associations.

* Adrien CLEMENCEAU (text and photos) is an independent reporter.

Translated from French by Assen SLIM