Has the process of Eastern European transition begun at the dawn of the 1990s come to an end? For the economist Wladimir Andreff, professor emeritus at the University of Paris 1 Panthéon Sorbonne, it is a mutation still in progress. Rather than convergence, we should evoke a congruence characterized by “greed capitalism.” 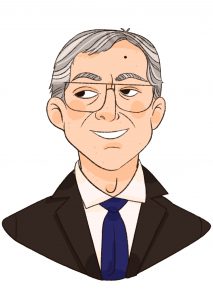 Wladimir Andreff, honorary member of the European Association for Comparative Economic Studies and former President of the Association Française de Science Economique, agreed to discuss with Regard sur l'Est some of the characteristics of the economic transition begun by the countries of Central and Eastern Europe some thirty years ago. He seeks, in particular, to put the right words on this long, unfinished but irreversible process.

How would you define the transition process that began in Eastern Europe in the early 1990s?

The transition process in Eastern Europe, which began in 1990, was an attempt to bring about a profound transformation of the centrally planned economic system, which had been more or less reformed during the previous decade, and of the non-democratic, self-proclaimed socialist or communist political regime, whose single party attempted to control the economy through centralized decision-making.

This process, which began with a political rebellion against the regime in 1989 (the fall of the Berlin Wall and the spread of its consequences to Eastern Europe), was guided by two objectives: to end the existing system and replace it with a decentralized market economy and political democracy. It was thus a voluntarist transition with two variants: one teleological, enshrined in the Washington Consensus (stabilization, liberalization, privatization), claimed to know the unique and uniform outcome of the transition it wanted to achieve and therefore sought to complete it as quickly as possible through shock therapy; The other genetic, grouping together the advocates of a gradualist transition, was aware that the transformation would take a long time to break the economic interdependencies of the old system and establish typical market interactions, and would have a winding path and an uncertain endpoint, probably different from one Eastern European Economy in Transition (EEET) to another.

Thirty years later, the initial opposition between shock therapy and gradualism has lost its relevance for four reasons: 1/ what matters is more where each EEET has reached in 2020 rather than the strategy it adopted at the outset, incredibly since some EEETs have varied their approach over time; 2/ in 30 years, there have been phases of progress and setbacks in the transition everywhere, making it de facto gradual; 3/ the World Bank published a report in 2002 recommending that privatization be stopped at a forced pace, even though the EEETs had already stabilized and, for the most part, liberalized; 4/ for many of these economies, the preparation for EU membership meant that priority had to be given to the institutional dimensions of the transition (the adoption of the “acquis Communautaire”)

What distinction do you make between “transition” and “mutation”?

Originally, “transition” is a Marxist concept designating how another replaces one mode of production, according to a deterministic process over historical duration - often several centuries -, as the passage from feudalism to capitalism. But it appeared in 1917 that a transition could be triggered by a voluntary action (Bolshevik revolution) to transit from capitalism to socialism, here again with two variants, teleological (Preobrazhensky) and genetic (Bukharin).

This notion of transition was then transposed into the comparative (Western) analysis of economic systems. The events of 1989-90 in the EEETs had a vital voluntarist component, driven by the wind of neo-liberal ideology blowing notably from Washington - did not Joseph Stiglitz, with others, denounce the “ideologues of the all-market”?

Adhering neither to this ideology nor a teleological approach to transition, I wanted to forge another concept of “mutation” to account for the fact that the process underway from 1990 onwards was a long one (and not an overnight upheaval) to eradicate the old system and transform it thoroughly into a well-functioning market economy - the duration estimated by János Kornaï and others was one generation, 25 years. If the fruits of this transformation were not expected to ripen slowly, I was among those who predicted that the process would be accompanied by embezzlement, corruption, misappropriation of funds (to which the accelerated privatizations contributed significantly), and the retention of economic power by the former communist leaders, who were transformed into oligarchs, what we have seen in practice.

It must be admitted that “mutation” was not a tremendous conceptual or media success. For those who wished to distance themselves from the neo-liberal transition, including at least some gradualists, the rallying point was the notion of "transformation,” possibly evolutionary.

My approach led to my being called in as an “economic advisor,” first in countries that did not accept the Washington consensus 100% (Slovenia, Vietnam, Belarus, China, Algeria) and in a few others, at a time when they were revising their strategy somewhat during the 1990s in the spirit of what would later be contained in the 2002 World Bank report.

Has the transition in Eastern Europe been completed, and if not, what would be the objective criteria for judging it? Should a distinction be made between countries that have joined the EU and those that have not?

The answer must be based on quantitative and qualitative criteria. From the second point of view, a sound generation has passed (30 years) and, in most EEETs, the changes that will occur in the next 30 years will not be of the same magnitude as those of the past 30 years, or else for other, let us say “less systemic” reasons (climate change, environmental pollution). Except in those EEETs that are late in the transition (Serbia, Bosnia, Kosovo) or that have experienced a severe transition crisis, which has set the process back (the 1997 financial pyramids in Albania), the transition can be considered complete from this point of view; the process will not progress as massively as before, if at all.

The investments made since 1990, including and especially foreign investments, have modernized the production systems of the EEET. In almost all the EEETs, car spare parts are now produced in the same way as in factories located elsewhere. The method of life and consumption has changed profoundly. Goods and services that used to be free (education, culture, some health care, etc.) are now paid for at market prices. Others, on the other hand, which were inaccessible or non-existent before the transition (except for a few privileged members of the nomenklatura), such as unrestricted mobility, the diversity of choices offered to consumers, or the freedom of enterprise, are accessible to anyone who can pay for them.

My most recent missions to Budapest, Ljubljana, Tallinn, Prague, Warsaw, etc., gave me the impression that the way of life is increasingly similar to that of the inhabitants of Paris, Berlin, London, etc., including the profound inequalities between the “rich” and the “less rich.”

The institutional dimension is crucial, and perhaps the transition is not yet complete, especially in terms of the rule of law, the force of law, and its practical implementation. The divide between the EU member EEETs and the non-members is very clear decisive. In the latter, corruption, market failures, bureaucracy, parallel economy, and lawlessness are daily realities experienced by citizens. Even some EU member states, Romania and Bulgaria, have a poor grasp of these abuses (and thus the acquis communautaire). As for the two former “model” countries of transition, Hungary, and Poland, the biggest beneficiaries of EU economic aid for the past 30 years, are increasingly showing their willingness not to submit to specific standard EU rules. I do not have the expertise to analyze these drifts of “illiberal” democracy. Still, they seem likely to delay the end of the transition to a true democracy, as Romanian researcher Daniel Daianu argues(1).

The term economic catch-up is a “trap,” but less than that of nominal and real convergence (often used as a criterion for accessing new members to the EU). Is it a question of catching up with the most developed capitalist countries, the average level of development within the EU, the least developed countries of the EU?

On the other hand, if the goal is for Kosovo to catch up with Denmark, I'll see you in several centuries, if ever. Because the most fundamental law of the capitalist economy is unequal development: it does not generate catching up, but an ever-renewed differentiation, and therefore delays some on the others. The market competition of all against all always has winners (innovative firms, multinationals, unidentified unfair competitors, etc.) and losers (bankrupted firms, declining industries, etc.) that are unequally distributed among countries, causing unequal development among them.

The proof is in the EEETs: in 2019, Slovenia's GDP/head is three times that of Bulgaria (2.3 times Romania), the Czech Republic's is about equal to those of Greece and Portugal. But Bulgaria's GDP/head is twice that of Kosovo (and 1.7 times that of Albania). In terms of progress, starting from a low base, Estonia and Lithuania have a higher level of GDP/head than Hungary and Poland (just over 17,000 euros each, 65% of Slovenia's group), which have made less progress in 30 years than the Baltic countries (Estonia: 20,000 euros of GDP/head). Economic catching up is uneven, like capitalist development.

Other quantitative criteria (inflation, unemployment, foreign trade) would be necessary to appreciate and differentiate the state of transition in each EEET (but there is not enough space here); the Maastricht criteria (public deficit, public debt) can no doubt be forgotten since they have regularly not been respected by some EU members (including France) and have effectively been abandoned since the Covid-19 crisis.

A few years ago, you put forward the hypothesis of system congruence. Could you briefly define the main idea? Has this hypothesis been realized?

Before the transition, economists (following Jan Tinbergen) envisaged a possible convergence between the plan and the market, capitalist and socialist systems. In the 1960s and 1980s, some Yugoslav, Polish and Hungarian reformist economists adhered to this idea. The idea was to combine the respective advantages of the plan and the market, capitalism, and socialism to a certain extent. My concrete observation of the EEETs and the results of their reforms before 1987-89 did not lead me to such optimism. Especially since, at the same time, the Western economies were evolving towards globalized and financialized capitalism.

I used the “congruence” (initially a mathematical concept) of systems to mean that capitalism and socialism could come closer together in a negative way by borrowing from each other their disadvantages, their darker, less desirable sides. It seemed to me that the neo-liberal transition risked realizing this anti-ideal type. I notified it with the idea of “greed capitalism”(2), extending the hypothesis of congruence, enriching it with borrowings from Joseph Stiglitz (economics of greed) and the analyses of the financial crisis (Aglietta, Boyer, Jorion, Lordon, Orléan). The hypothesis is that, from 1990 to the subprime crisis and the Great Recession, we observe drifts common to the processes of transition of the EEETs and the financialization of capitalism based on a (negative) dynamic of asset capture (extortion) activities that counteract capital accumulation in the real economy. These deviations partly originate in the forced privatizations of the EEETs and their consequences and partly in the destructive practices of international finance and shadow banking, which have also spread to the EEETs.

For the moment, “greed capitalism” has not met with conceptual or media success in characterizing the current crisis phase of the world economy, including the EEETs, any more than "mutation" has.

What do you see as the major lessons to be learned from this historical experience of systemic change in Eastern Europe?

Assen SLIM is a senior lecturer at INALCO (blog).

Translated from French by Assen SLIM.