The recent comeback of Soviet rock at the tail of popular protests in Belarus is a reminder of the influence and the soft power music can have on street politics. Revived through film in Russia and street protests in Belarus, Soviet rock and later Russian rock has managed to transcend the generational and identity gap and to galvanize modern civil society in the post-Soviet region. 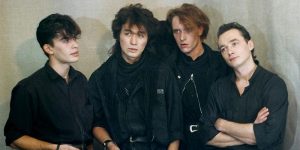 On the morning of August 6, 2020, two DJ’s of a Minsk “palace of children and Belarusian youth”, Vlad Sokolovsky and Kirill Galanov, got a call. Their boss told them to go play pro-Lukashenko tracks at the Kiev square in Minsk, at the time when a political rally in support of the opposition presidential candidate, Svetlana Tikhanovskaya, had been planned. “We were to be used as a sound-plug. … So we decided to show solidarity with the people who came to the scheduled rally”, Sokolovsky explained later in an interview he gave to Tyt.by. Instead of pro-Lukashenko propaganda, they played Peremen! [We are waiting for change], a song by a legendary Soviet rock singer Victor Tsoy, which became an anthem for a generation of the Soviet citizens on the eve of the empire collapse. Written more than 30 years ago, the song was easily remembered both by the Belarussan people and by the state. Written in 1986,  Peremen! became a unison expression of solidarity by the civil society not only fed up with the system, but also ready to proclaim it right into the system’s face.

Sokolovsky and Galanov instantly became media heros, and received the heros’ treatment: 10 days imprisonment in the now infamous Belarus prison, which Sokolovsky remembers thus: “The night from the 11th to the 12th of August was the scariest. From my prison cell I heard continuous screaming and thuds of beatings. There were people standing in the corridors, too, and I heard one of the policemen tell someone, ‘We’ll make you fully disable, so you’ll never walk again!’ Everyone in my cell was wishing for only one thing: that they don’t come here.” Later on, both DJs were offered political refuge in Lithuania, which has since accepted many other Belarussian victims of political repression.

Music is an inner expression tool for individuals and political groups. Thus, not only music itself, but its memory can stir controversy and reaction in an authoritative society. The 2018 movie Leto [Summer] about Viktor Tsoy’s rock band Kino produced by Russian director Kirill Serebrenikov was perceived by the establishment as a call for civil disobedience. Leto brings to life Leningrad underground rock scene of the 1980’s, with its « appartment concerts » and illegal music recording through magnitizdat, bypassing censorhip. In the era of music streaming of 2018, with Russian rock all but unknown in the West, the film appealed to people’s emotions and was warmly received in theatres across Europe. Censorship is the common feature between the two historic periods, 40 years apart. Serebrennikov’s imprisonment in 2018 (for reasons unrelated to the film), as Leto was competing for international prizes, served a reminder that in modern Russia the freedom of expression remains as consequential as it was in the Soviet Union.

Rock as a discending voice against a social order

During the Soviet era, music was seen by the authorities as a political and propaganda tool. Back then, only professional and conformist musicians were accredited by the Union of Composers and able to perform at concerts and have their albums recorded and sold. This started to change by the 1970’s, with Nikita Khrushchev and the “thaw”. This is when the Party authorized an amateur music scene to emerge, under the vigilant eye of the Party youth organisation Komsomol(1).

Soviet rock was born in this context. Early Soviet rock musicians were influenced by the poetry of Soviet bards, such as Bulat Okudzhava or Vladimir Vysotsky(2), with a much stronger influence of Western rock, glimpsed through the airwaves of BBC and black market vinyl disks. These rock musicians were preceded by Stilyagi(3), a community which appeared in the USSR after World War II:  talking slang and dressing up in colorful and stylish clothing, out of line with the usual drab tones and cuts of the Soviet fashion. Though they did not compose music, Stilyagi were among the first to defy the Soviet societal conformism. A creative expression of self, whether through music or fashion, in a uniform society was a way to « conquer one’s inner freedom »(4).

After a first rock generation, which opted for hazardous remixes of Western rock and sang in English, a second one emerged, operating from the underground by the end of the 1970’s, challenging the popular but meaningless Soviet “pop” of Alla Pugacheva or Muslim Magomayev. It increasingly resonated with the Soviet youth for its provocative lyrics, stinging the regime from behind a thin veil of ambiguity (or “different layers”(5) of meaning open to interpretation).

Akvarium’s Poezd v ogne [Train on fire] launched in 1988 became one of the anthems of perestroika: Colonel Vasin, reaching the frontline with his young wife, tells his soldiers to flee and go back home, explaining that the only battle they are waging is against themselves. The train on fire served an unmistakable metaphor for the Soviet Union on its endless journey toward socialism. It embodied a lost cause, something the new leadership mostly understood. In this song, Colonel Vasin embodies Mikhail Gorbachev who was also regularly appearing in public with his wife, Raisa Maximovna. He implemented the perestroika and glasnost reforms and was the one who finally recalled the Soviet soldiers in Afghanistan to go home.(6)

The Golden Age of the Soviet rock started in the mid 1980’s, when concert tours and movies such as Assa by Sergey Soloviov turned new Russian rock singers into stars, and when on the eve of perestroika, these groups dared to wander into the uncharted waters of style. The rock spring reached its climax at the August 1989 Moscow Music Peace Festival, the first international rock festival organized in the USSR with Soviet and international artists(7).

From downfall to revival?

By the early 1990’s Soviet rock fell on hard times: the music community was shaken by the death of several important rock figures, such as Viktor Tsoy, Mike Naumenko and Alexandr Bashlachev. Most importantly, the fall of the Soviet Union, the empire to which underground music stood in staunch and loud opposition, rid the cornerstone philosophical component of its target, thus depriving the genre of its essence. Once the dragon was slain, what was the meaning of the hero’s quest? Finally, the changing times brought new priorities and a new audience, no longer interested in soul-searching through dark philosophical brooding. Soon, the audience was to embrace the vast scene of new meaningless pop, offering an escape from new grim realities of the free market world, where feeble democracy was to prove its worth(8). Furthermore, hardly exportable abroad, Soviet-turned-Russian rock was hit by hacking.

The self-organisation of the civil society after the presidential elections in Belarus brought back the sound and relevance of the Soviet rock. After a surprise revival of Viktor Tsoy’s Peremen! launched by the two Minsk DJ’s, which  resonated among Belarus civil society, the Russian rock community picked up the initiative. Realising the new relevance of its old message, which some thought oudated, the early Soviet rock star of Mashina Vremeni, the lead singer Andrei Makarevitch, took part in the Parti-Zan-Fest' online concert launched on 30 September 2020 by two Russian independent media outlets: Novaya Gazeta and TV Dojd, in support of the Belarusian victims of repression, proving that music remains a powerful tool to deliver a political message. Aware of that, a new generation of artists in Russia and the post-Soviet region is putting this tool to work. From 2018 Leto film by Serebrennikov, to IC3PEAK Russian band performance at the summer 2019 protests in Moscow, to a new wave of national rock in Belarus in the summer of 2020, music in the post-Soviet space is again serving to make a difference, and to make individual voices heard.

* Gabrielle VALLI is a student at Sciences Po Paris and Eastern Circles vice-President.