Since Moscow launched its military offensive against Ukraine on February 24, debates have multiplied about this country, questioning, in particular, the consolidation of its identity and its State, the legitimacy of its President, or the genuine aspirations of this population, which has surprised by the strength of its resistance. 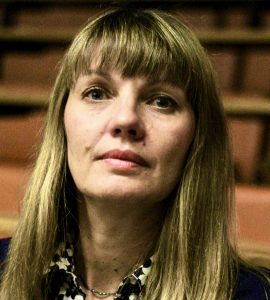 Alexandra Goujon, a political scientist, lecturer at the University of Burgundy, teacher at Sciences Po Paris, and member of the Center for Research and Studies in Law and Political Science (Credespo), is a recognized specialist in Ukraine and Belarus. She published in November 2021, Ukraine. From independence to war. Her book, which challenges many preconceived notions about this country, was co-winner of the 2022 Mieux comprendre l’Europe prize sponsored by the Delors Institute.

Alexandra Goujon was kind enough to answer questions from Regard Sur l’Est.

Your book was published three months before Russia launched its offensive against Ukraine. Yet the title evokes the war, the haunting one that the country has suffered since 2014 with the occupation of Crimea and the destabilization of Donbas. Do you think that V. Zelensky, elected on the promise to end this war, bears responsibility for the one launched on February 24?

I do not think that V. Zelensky is responsible for the Russian invasion launched on February 24. Upon coming to power, he sought direct dialogue with V. Putin, which allowed the organization of a summit in the Normandy Format (Ukraine, Russia, France, Germany) in December 2019 in Paris. Conciliatory at first, the Ukrainian President understands that Russia is not trying to find a solution to the conflict in the Donbas but to make this region a Trojan horse to interfere in political decision-making in Ukraine, especially in foreign policy. However, the dialogue between the two men has led to prisoner exchanges and a relative military disengagement along the line of contact with the separatist entities.

The Russian invasion is motivated by an obsession of the Russian leadership to limit Ukraine’s sovereignty as much as possible. V. Zelensky, as a head of state from a Russian-speaking and industrial region, understood this relatively quickly after he came to power.

Since Ukraine’s independence in 1991, the media and Western observers have constantly emphasized the country’s internal fractures and divisions. Ukraine is indeed culturally, religiously, and linguistically diverse. Still, national construction has been at work since 1991. It has been consolidated around a civic community that the revolutions - including the Maïdan revolution - have strengthened around the flag and the national anthem. The Russian invasion of February 24, by attacking the state as such, also highlighted the territorial attachment and the will of Ukrainians to self-determination, as shown by the resistance against the occupation. The Ukrainians want to be able to choose their leaders. They manage their municipalities in their way, including in the southern and eastern regions that are too often presented as pro-Russian. Distrustful of their elites, they have nevertheless rallied behind their head of state, their mayors, and their army, which is the most popular institution in the country after the President. The independent Ukrainian state was also born from the Ukrainian SSR, in which specific identity markers existed (artistic unions, magazines in Ukrainian, the transmission of family history...) despite Russification. Let us recall the title of this work by the writer Ivan Dziuba written in 1965 - Internationalism or Russification? - which shows a concern for the Ukrainian language.

Can you shed some light on the linguistic question in Ukraine? We understand that it is not enough to draw a map of the use of languages on the territory to deduce particular cultural apprehensions.

The language issue is often misunderstood. Still, in the wake of the famous fractures, some analyses oppose Ukrainian and Russian speakers. However, since the beginning of the conflict in Donbas, we note that many Russian speakers are on the side of the Ukrainian army. Russian-speaking people cannot be equated with belonging to the Russian cultural world, mainly because it is the result of the Soviet linguistic policy, which made Russian the majority language in Ukraine. As early as the 1960s, Ukrainian intellectuals denounced the possible extinction of the Ukrainian language, hence the policy of measured and gradual Ukrainization that was put in place after independence.
Moreover, although the languages are different (almost as much as Spanish and French in terms of lexical similarity), they have long coexisted on the Ukrainian territory. Therefore, Ukrainian and Russian speakers can communicate and understand each other. This inner comprehension is also likely to progress with the movement of internally displaced persons from the east to the west of the country since the beginning of the invasion. In some areas of eastern Ukraine, the desire to foster relations with Russia - which does not mean a desire to be attached or to submit - is as much linked to geographical proximity (commuting, economic exchanges) as cultural proximity.

Another argument used by Moscow to justify its invasion of Ukraine is the famous ambition to "denazify" Ukraine. Where does this accusation come from? What about the role of the Right Sector during the Maidan revolution or the ideology of the Azov battalion, which we heard a lot about during the siege of Mariupol? 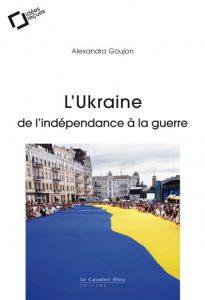 During the Maidan Revolution and after the flight of President V. Yanukovych to Russia, the Russian media spoke of a fascist coup d’état to refer to the change of power to discredit it and show that it was the work of the far right, including the Right Sector, which emerged as part of the uprising. The far right represents only a minority of those mobilized in the popular uprising and a few ministers in the transitional government, which is dominated by democratic political forces. Subsequently, the far-right parties visible through their street marches disappeared from political institutions (2% in the presidential and legislative elections of 2019). As for V. Zelensky, a political outsider, he has no nationalist socialization.

The Azov battalion, meanwhile, made its name in 2014 when the Ukrainian army was weak and defended Mariupol, which will remain under Ukrainian administration, 15 km from the line of contact, until the Russian invasion in February 2022. The defense of the city gave it a certain prestige. Despite using the Wolfsangel symbol linked to Nazi imagery, the battalion is ideologically heterogeneous, especially with post-invasion recruitments, representing only a tiny percentage of Ukrainian military forces. After participating in the resistance in Mariupol and then surrendering at the request of V. Zelensky, its fighters are considered Ukraine as national heroes.

Do you think that the Western community supports Ukraine sufficiently? Are the military, humanitarian and financial aid the sanctions against Russia... enough to change the course of the war?

The Ukrainian authorities regularly ask for an increase in aid to the country and sanctions against Russia. This was already the case in the spring of 2021, with the active diplomacy of V. Zelensky, who feared Ukrainian fatigue. This fear has been redoubled since the Russian invasion, whose objective is destroying the Ukrainian state. Given the military imbalance between the Ukrainian and Russian armies, Western aid to Ukraine in the form of military equipment and training is essential for the country’s defense and, according to Kiev, must not weaken when Russia occupies 20% of the territory. This aid also reopens the debate on the military budget in the member states of the European Union, including France. As for the sanctions against Russia, the first series was adopted quickly and by consensus within the EU. On the issues of gas or Russian visas, the debates are more visible. Experience shows that sanctions do not necessarily change a leader’s policy, primarily when the latter operates within the framework of an authoritarian regime such as Russia’s: V. Putin’s determination, relayed in the local media, does not seem to weaken. However, sanctions are forcing Russia to adapt.

On June 24, Ukraine became a candidate country for membership in the European Union. On the other hand, since the beginning of the war, it has renounced its application to join NATO through the voice of V. Zelensky. How do you see Ukraine’s future in Europe? What security guarantees can the Europeans provide?

Ukraine has moved from the neighborhood policy - which European leaders were keen on - to the enlargement policy - which was previously confined to the Balkans. The war in Ukraine has put the question of a European democratic space worth preserving back into the political arena. The Ukrainian national resistance, led by V. Zelensky, has taken the lead, and has also helped because it aims to defend freedom understood as a desire for independence but also as an attachment to the democratic model, clearly expressed during the Maidan Revolution in 2013-2014. From the Ukrainian point of view, the prospect of joining the EU was raised at the end of the Orange Revolution in 2005, without resonance on the European side. It should be remembered that it was during the term of office of the so-called pro-Russian president V. Yanukovych that the agreement was signed. Yanukovych that the association agreement with the EU was initialed in 2012, a deal that does not provide for membership prospects but a significant rapprochement with the EU, including in the commercial field. The annexation of Crimea in 2014 and the conflict in the Donbas raised the share of public opinion in favor of the EU above 60 percent, while NATO membership once again becomes, alongside EU membership, a foreign policy priority enshrined in the Ukrainian constitution in 2019. In March 2022, while negotiations were underway, V. Zelensky raised the possibility of renouncing NATO membership, but this was not enough to stop the Russian invasion strategy. According to a poll conducted by the Kyiv International Institute of Sociology (KIIS) in July 2022, 81 percent of respondents now support EU membership, and 71 percent support NATO membership in the event of a referendum.