The Main Cathedral of the Russian Armed Forces, an astonishing object that stands in the middle of the Patriotic Park in the Moscow region, is the result of an unexpected combination of doctrines: it can be seen as a demonstration of a singular syncretism, which mixes Orthodox religion, patriotism, and militarism, but also merges Russian and Soviet history.

Dedicated to the 75th anniversary of the victory in the Great Patriotic War (1941-1945) but also to the “great military deeds of the Russian people in all wars,” the main Cathedral of the Russian Armed Forces (Cathedral of the Resurrection of Christ) was erected about 60 kilometers from Moscow, within the Patriotic Park of Culture and Recreation of the Armed Forces of the Russian Federation, commonly known as the Patriot Park. The Cathedral was built in less than 600 days and financed by donations and public funds allocated by the State and the Moscow Oblast.

Everything is symbolic: the construction of the Cathedral was completed on May 9, 2020, Patriarch Cyril consecrated it on June 14, 2020, as part of the celebrations of the 75th anniversary of the victory and was inaugurated by the Russian President on June 22, the Day of Remembrance and Sorrow (which commemorates the date of the Nazi attack on the USSR, in 1941).

The facades of the Cathedral are covered with a metal plating that gives it a khaki-green appearance; the arches are glazed and inlaid with war medals, while the walls are decorated with frescoes evoking battle scenes from military history and biblical texts. Weapons and tanks seized from the Wehrmacht were melted down and created metal floors. 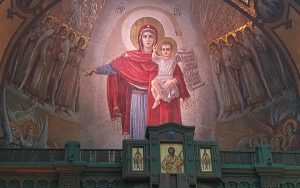 The mosaic “Image of the Mother of God-intercessor of Russia in the Great Patriotic War” is disturbing: we expect to see the order “The Motherland calls you” (Rodina-Mat zoviot) as its look and gesture of the arm evoke the Soviet. 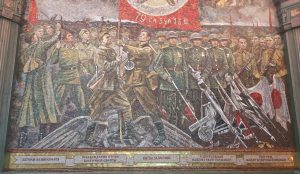 The mosaics illustrate different military episodes. Above the soldiers in arms hover historical figures, saints or angels, the times colliding, and all battles evoked. This mosaic depicting the victory of the Great Patriotic War has been the subject of controversy related to the initial presence of Stalin as Supreme Commander-in-Chief: for some, it would have had its place since he took the decisions that led to victory. However, the Synod of Bishops of the Russian Orthodox Church condemned the project, and removed Stalin.

On the left is “1783: bloodless annexation of Crimea”; on the right is “2014: bloodless reunification of Crimea”. V. Putin and S. Choïgou were initially to appear on this mosaic, under their role in the “return” of Crimea to Russia. Faced with this other controversy, the President would have considered it premature to proceed with such a tribute, which may be up to future generations to express. Some say, on the other hand, distinguish on the right side of the mosaic an evocation of the famous “little green men,” members of the special forces without insignia who contributed to the annexation of Crimea and whose presence was then denied by the Kremlin.

One of the mosaics evokes the Soviet and Russian armies since 1945, equipped with modern weapons. A long list aligns the conflicts commemorated, including the most recent: “conflict in Nagorno-Karabakh, the war in Yugoslavia, armed conflicts in Abkhazia, Tajikistan and Transnistria, the first and second Chechen wars, peace enforcement in Georgia, the fight against international terrorism in Syria, reunification with the Crimea.” There is also mention of Soviet interventions in Hungary (1956) and Czechoslovakia (1968) and the Soviet invasion of Afghanistan. There is still room at the end of the list for future conflicts.

Located in Kubinka, the Patriot Park was opened in 2015 by V. Putin. Covering more than 5,000 hectares, it brings together various museums (of aviation, armored vehicles, artillery), sports facilities, places for weapons and military equipment (the Army exhibition is held there every year), etc. As a site for education in patriotism, it can be seen as a theme park where families and school children are welcome. In June 2020, the Chemin de la mémoire - 1,418 steps to victory museum was also inaugurated. It is a horseshoe-shaped path that winds around the Cathedral for 1.5 km.

Each of these 1,418 steps embodies the Soviet war effort. The aim here is to reconstruct, using the latest technology, the main episodes of the Great Patriotic War. 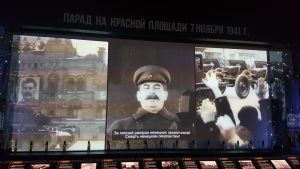 “For the total defeat of the German invaders! Death to the German occupiers!” (Excerpts from Stalin’s speech during the parade on Red Square on November 7, 1941). The museum also includes a “memory gallery” that displays tens of millions of photographs of war veterans.

Carried out simultaneously, the Cathedral and Museum projects are intrinsically linked and complementary. Their conception has raised some relatively strong criticism, mainly on two points: the combination of military and religious images on the one hand and Soviet and holy images on the other. It is difficult, for some members of the clergy who knew the Soviet years, in particular, to hear that many Soviet soldiers would have been religious (sic) and that, as such, the use of Soviet symbols in a Cathedral that intends to embody all the eras of Holy Russia (sic) is acceptable. But for some, the syncretism represented by this ensemble is adapted to the message delivered, in conformity with the Doxa/religion of the new Russia: the Russian soldiers, throughout the ages - and in particular, during the Great Patriotic War - have not hesitated to sacrifice their lives to save humanity.

Text and photos by the author.

* Céline Bayou is the editor in chief of Regard sur l’Est.

Link to the French version of the article.