Trained as an archaeologist and a journalist by vocation, Dimana Trankova gives us a glimpse into the intimacy of literary creation. In a sincere and very personal tone, she shares with us the hopes, the creative impulse, the constraints, and the annoyances of a writer in today's Bulgaria.

Born in 1980, Dimana Trankova embodies this generation of writers of the post-socialist transition. While remembering the declining socialism of her youth, she experienced the hardships of budget cuts and the throes of massive state disengagement during the 1990s. Like her contemporaries, she has felt the disillusionment of a society in crisis that falters while reinventing itself, neither quite the same as the old, nor quite alien to its history. “A crisis only becomes catastrophic if we respond to it with preconceived ideas”, wrote the philosopher Hannah Arendt(1). Dimana Trankova responds by thinking beyond oneself, by creating a literature that makes sense, by regenerating the language while remaining faithful to it, and by alerting us to what could happen to Bulgarian society... A condensed version of the contemporary Bulgarian writer, Dimana Trankova is a perfect illustration of her colleague Georgy Gospodinov's famous “We am”(2).

How did you start writing? Why?

In the summer of 2009, while Bulgaria was mired in the aftermath of a fresh global economic and financial crisis, I was mired in an early mid-life crisis.

I was approaching my thirties and had accomplished nothing that would look like an achievement to a critical outsider. I traveled often and to interesting places. I wrote in the English-language magazine Vagabond about life in Bulgaria centuries ago and today. I was not happy. I felt lonely. I was insecure - about my job, about my life, about my future. I had more free time than I was used to. I was suffering from an unconscious but acute need to create something. Something more lasting than the articles lasting just one month that I was writing for Vagabond.

It was in this state that I found myself in front of the Sitovo inscription. The runic signs engraved in a strangely shaped rock near the deserted village of Sitovo, in the Rhodopes, are one of the unknown mysteries of Bulgaria. Twisted and shallow, gray like the stone in which they are carved, they are mostly barely visible. Perhaps that is why those who look at them see in them what they want to see.

In 1943, the police of tsarist Bulgaria (according to a story whose authenticity I have not verified) decided that the runic signs were the code by which Alexander Peev, a Bulgarian officer and Soviet spy, had communicated with the USSR. In vain, A. Peev explained that he had sent these strange characters to Ukraine in the hope of getting help to decipher them.

Amateur historians claim that the Sitovo inscription was created by one of the ancient - and probably without written language according to the official theory - peoples sharing a common DNA with the modern Bulgarians. During communism, the inscription was considered to be proto-Slavic writing. More recently, it has been attributed to the ancient Thracians.

In 1928, the villagers who took Alexander Peev to the inscription believed that the signs indicated the location of a hidden treasure. The centuries-old treasure hunt in Bulgaria is still alive today. Having replaced the old romantic legends with metal detectors, contemporary treasure hunters are destroying entire ancient cities, oblivious to the destruction they cause, entangled in the network of organized crime that stretches from poor villages to the heights of the state.

The Sitovo inscription will probably never be deciphered. It may not even be an inscription, and it is geologists who should talk about it rather than linguists or historians. But the stories and phantasmagorias that have accumulated around it give a glimpse of what Bulgaria and the Bulgarians of the last centuries have been like.

When, in the summer of 2009, I went from the humid coolness of the Rhodopes to the suffocation and dust of Sofia, my thoughts were elsewhere. Still excited that I had the courage to swallow my fear of heights to crawl up the short but steep path to the Sitovo inscription, I thought the place would be ideal for a thriller in the vein of those that made Dan Brown a millionaire.

Just imagine. A mysterious ancient inscription. A bloody murder. A thousand-year-old mystery! All the ingredients for an international bestseller and crowds of international tourists.

And that nagging thought: what if I wrote this thriller? No, I can't. But why not? Here's my chance to leave behind something bigger than a few dozen articles in a magazine threatened with bankruptcy. I would rewrite my life story. And when asked why I am not an archaeologist when I have a degree in archaeology, I would no longer have to answer with my usual irony, "I gave it up because of the high salary, the career growth prospects, and the good relationships with colleagues". Instead, I would respond with a modest smile, "Being a journalist with an archaeology background definitely helped me write my first bestseller".

The turning point in my life would then emerge from the shadow of doubt (who actually decides to study archaeology instead of law in 1999 Bulgaria?) to acquire the aura of an intuitive decision, which seemed foolish and naive at the time, but was finally the right thing to do.

One night I put on some music, poured myself some whiskey, and wrote the first few sentences of a story about ritual murders committed in ancient Thracian sanctuaries by someone who seemed to be using Herodotus' Histories as a textbook.

A few chapters later, my story began to mutate.

The formula of the historical thriller is that secret societies and esoteric conspiracies are behind all the evil in the world. But I don't believe in secret societies or conspiracies. To go down that road would have been dishonest to me, to my readers, and to my characters in the book, who I felt were coming more and more to life.

So I broke with the conventions of the genre and let the story take shape on its own: a portrait of Bulgaria and Bulgarians after two decades of traumatic transition from a communist society and a totalitarian state to a problematic liberal democracy and a free market. A world of depopulating villages, emigration, suffocating organized crime and burgeoning nationalism. A world that two journalists - alone and looking for something to give meaning to their lives - naively think they can change. One of them, of course, has a degree in archaeology.

To what extent have I talked about myself? I made a conscious effort not to write autobiographically, and I think I succeeded. But one cannot completely escape oneself - and perhaps one should not try to do so. 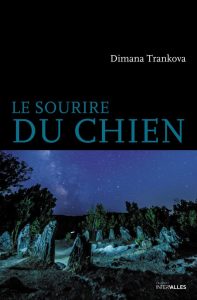 After three blissful years of writing in secret and developing an unhealthy relationship with alcohol, The Smile of The Dog found its first readers. It did not become a bestseller, but it is now a bibliographic rarity. A few other Bulgarian archaeological thrillers have appeared. However, they follow the formula of Dan Brown.

As for me, I wrote a continuation of the story - a kind of anti-utopia. My second book, The Empty Cave, was inspired by my fear of the technological panopticon and the authoritarian direction Bulgaria and the world took in the 2010s. And the fear that, if I had to make a moral choice between freedom or security, truth or survival, I would make a decision I would be ashamed of.

Strange journey. While writing, I sometimes used the news of the day. And the news sometimes brought up events that I had invented months before with the firm conviction that they could not happen. Once, when I was describing an earthquake, a real earthquake happened...

Nowadays, when I read the news, I sometimes say to myself, "I told you this would happen! If you had read The Empty Cave! If you had understood it!". Then I laugh about it or take a quick drink or complain to a relative with a mixture of self-irony and anger, "See, I told you so!"

As a writer, what difficulties do you face in Bulgaria?

The difficulties are the same as for any writer in the world. Having something to say, figuring out how to say it, finding a way to reach readers, and (at least in my case) not completely pissing yourself while doing it.

And also: how to reach readers outside Bulgaria, given that you write in a "small" language, good translators are few and there is virtually no government policy in this area. I was very lucky to meet the translator Marie Vrinat-Nikolov and to find in her a kind reader, a friend and an ally who is fighting for the French editions of The Smile of the Dog and The Empty Cave.

Some time ago I participated in the Elizabeth Kostova Foundation's creative writing workshops, which encourage emerging Bulgarian and English-speaking authors. There was a meeting with students at the end. We, the participants, sat and passed around our microphones while the audience asked questions. How do you write? Why do you write? What inspires you? And we answered - ten mouths, ten imaginations, ten hopes. We were all saying the same thing. The meeting could just as easily have been with a single beginning writer.

The same is true with established authors. The latter just answer with more aplomb, in a routine way and - depending on their character - with a perceptible boredom.

But the answers are always the same. I don't know if it's because the creative process is the same for everyone, regardless of the final result and fame. Or have we read and listened to other writers on the same subject so much that we have absorbed their words and involuntarily repeat them because it sounds "writerly"?

That's why I stay away from the literary scene.

In fact, I don't consider myself a writer. I've only written two stories that I couldn't help but write, and which someone agreed to publish. My attempt to write a third novel, "because that's what real writers do," was an instructive failure. It's like this.

Do you have any other projects?

I'm fresh out of my forties today. It's a crisis again. I don't travel as much. I'm still writing for Vagabond, still worried if we're going to go bankrupt. After long and painful resistance, I accepted the fate of The Smile of the Dog and The Empty Cave. My relationship with alcohol is healthier. I gained friends, I lost friends. Sometimes I'm lonely.

The energy I put into writing novels goes into writing articles for Vagabond. On the internet, their life is much longer than a month - at least, while www.vagabond.bg is online. Instead of fiction, I write documentaries - books in English about Bulgaria's cultural, historical, and religious heritage. Whether it's thousands or 40 years old, it's varied and exciting. It doesn't need fancy ancient scripts to be "sexy." We just need to know it. Our latest books, A Guide to Communist Bulgaria and A Guide to Jewish Bulgaria, are about that - about the past hidden in plain sight in the streets we walk every day. The next one is about Strandzha - the "mystical" mountain of walking on live coals nestinari, deserted villages and the ruins of barracks and wire fences that guarded the border of socialist Bulgaria with NATO Turkey.

Sometimes I miss writing fiction. But only sometimes.

Translation from Bulgarian: Assen Slim (thanks to Petter Strutt for his proofreading).