At the time of the Russian invasion on 24 February 2022, Ukrainian forces numbered 196,000 and suffered a significant capability disadvantage compared to Russia’s 900,000 troops. Moreover, in 2022, Moscow spent $61.7 billion on its defense (4.3% of GDP), compared to Kyiv’s $5.9 billion (4.1% of Ukraine’s GDP), which was ten times less. Yet Ukraine has been able to adapt, resist and innovate with its partners’ financial and capability support. 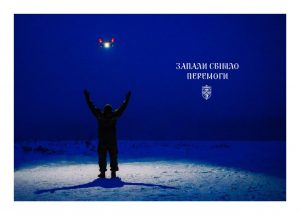 Created in the aftermath of Euromaidan voluntarily, Aerorozvidka became a full-fledged Ukrainian military unit on 24 February 2022, consisting of 50 squads of drone pilots. It is a demonstration of strength that underlines the power of drones in 21st-century warfare. Will the Ukrainian war be resolved in the sky?

The automation of conflict, a strategic alternative to the imbalance of forces

The outcome of a conflict does not depend on technology alone. Still, innovation is a critical issue in ensuring the operational supremacy of armies, according to the Chief of Staff of the Air and Space Force(1). For example, during the Soviet period, Ukraine accounted for 17% of the country’s military resources. It had 1,068 combat aircraft in 1991, whereas today, it has only about a hundred, compared with almost 2,000 for Russia. Thus, for the Ukrainians, innovation and automation are essential levers for operational superiority or, at the very least, for leveling the initial imbalance of forces.

The Russian doctrine concerning drones was developed from 2008 onwards, in the context of the Russian-Georgian war: faced with the use by Tbilisi of Israeli reconnaissance drones over Abkhazia and South Ossetia, Russia became aware of its shortcomings in terms of anti-drone warfare. Moscow then decided to compete with the two significant players, Israel and the United States and embarked on a drone race. As a result, Syria will become its first laboratory for the operational use of drones, an opportunity to test its strategy for using unmanned aircraft systems(2). Before 24 February 2022, the number of drones owned by Russia amounted, according to the Russian President, to 2 000.

Ukraine, for its part, already had a hundred or so drones at its disposal before the launch of the "special operation,” used in particular on the front line of the Donbas, which had been opposing pro-Russian and Ukrainian separatists since 2014. The Ukrainian doctrine on drones was built in stages: following Ankara’s use of TB-2s in Libya, Syria, and Nagorno-Karabakh, Turkey’s reputation found positive echoes in Ukraine. Developed by the Baykar company, the TB-2 has an autonomy of 24 hours with a payload of more than 50 kilos. Turkey is banking on this diplomatic tool to destabilize the American and Israeli hegemony in this area. In January 2019, it sold six drones to Kyiv for 69 million dollars, then envisaged co-productions of TB2s on Ukrainian territory.

Used since 27 February on a Russian Buk surface-to-air missile system 100km from Kyiv, the TB-2s locate, monitor, and destroy strategic military plans, armored vehicles, ships (e.g., the cruiser Moskva in April 2022) or oil refineries (Novoshakhtinsk). Aerorozvidka has ordered twenty reconnaissance and armed UAVs, respectively, the Bayraktar mini and the TB-2. The drones used by this team of operators need a strong and stable connection to the Internet, which the Starlink network provides. Ukraine has received $20 million in support for acquiring drones (from the US, private funds, and crowdfunding). Kyiv has not hesitated to publicize the effectiveness of this aircraft, broadcasting images of destroyed Russian military craft on channels such as Telegram. About the success of the TB-2s, a Ukrainian soldier even wrote a song, which was sung during the protests against the Russian invasion: “The occupiers invaded us in Ukraine, with brand new uniforms, new military vehicles that melted a bit! Bayraktar, Bayraktar !”.

Faced with the TB-2, Moscow secretly approached Iran in July 2022 to acquire hundreds of Shahid kamikaze drones. Kyiv’s anti-aircraft defense systems, which were already insufficient in number, initially proved to be poorly adapted to this new threat. On the other hand, this Russian-Iranian rapprochement is undoubtedly an admission of industrial failure for Russia. Supposed to have the equipment for this range, Moscow needs more human and technological resources. More broadly, Russia seems to be struggling to keep up a high production rate (the Russian government has, for example, ordered ammunition factories to work overtime to produce more). Hindered by the sanctions, it would nevertheless continue to produce Kh-101 missiles(3) and supply itself with semiconductors thanks to dual-use components from American and European civilian equipment (washing machines, dishwashers)(4). On 23 November, Russia reportedly used these missiles, manufactured between the summer and November 2022, against Ukraine.

On both sides, drones save millions of dollars worth of ballistic missiles (which are widely used by Moscow) and compensate for the small number of fighter planes available to Ukraine.

Since February 2022, drone warfare has thus become an increasingly important part of the Russian-Ukrainian conflict for both forces. In the first weeks of the war, Ukrainian remote-control units carried out about 100 missions per day and caused damage without external support. In this regard, the Ukrainian Reconnaissance Team defines the current war as an artillery and drone conflict.

Even before the invasion, Ukraine had its arsenal of drones, such as the Menatir, Punisher, and Spectre, produced by the UA-Dynamics company, most of which employees are former Ukrainian veterans of 2014. In addition, Kyiv launched its Ukrainian Shield strategy in 2015, aiming to break away from the Russian defense market. At this time, industrial relations between Kyiv and Ankara became closer. Following Russia’s illegal annexation of Crimea, Turkey realized it had a commercial opportunity with Ukraine. While commercial Russian-Ukrainian ties were broken, Ankara could hope to attract external financing on this abandoned market, influence the Black Sea regionally, and limit Russian influence while taking advantage of the Ukrainian aeronautics industry market. This industrial cooperation rapidly intensified: in 2019, TB-2 engines produced by the Ukrainian company Ivchenko-Progress were purchased by Turkey(5). In 2021, Kyiv announced installing a training and maintenance center focenterish drones and creating a joint venture, Black Sea Shield, dedicated to the local production of combat drones(6).

From a geopolitical point of view, Turkish drones are a delicate variable in Turkey’s Russian-Ukrainian diplomatic equation. Lately, the Turkish government has tried to spare Moscow by pointing out that private companies only carry out industrial partnerships. Ankara is clearing its name and stresses in this respect that the marketing and production of the TB-2 were negotiated before the launch of the “special operation” by Russia. The fact remains that, as propaganda tools that undermine the morale of Russian soldiers on the front, Turkish drones brilliantly succeed in leveling, albeit in the short term, the capability asymmetry.

Due to financial and industrial constraints, Russia does not produce very high-tech UAVs. Russian UAV capabilities rely heavily on imports from Austria (Schiebel, pre-2014), Israel (Zastava, pre-2014), and now Iran (Shahid). Moscow is getting closer to Iran in a context where Tehran, also under sanctions, wants to bypass the anti-Iranian dynamic created following the Abraham Accords. Since the war in Syria, Tehran has also proved to be an ally of circumstances for Moscow. The sale of Shahed-136 could allow Iran to access advanced Russian weapons systems, including the Su-35. This is not without concern for Washington, which has already warned of this unprecedented military and technical support partnership. According to the American National Security Council spokesman, John Kirby, Moscow and Tehran are discussing a joint drone production line. The kamikaze drones used by Moscow, which cost an estimated $20,000 each, have contributed to the destruction of a third of Ukraine’s critical civilian infrastructure.

The geopolitics of drones, which certainly raises ethical questions because of the automation of weapons and the responsibility attributed to them, is a revealing element in the mutation of the war in Ukraine, both on the military and geopolitical levels. It now appears as a relevant air capability, a factor in rebalancing the forces present, without, however, replacing the need for ground capabilities and fighters to win a war. In this respect, the war in Ukraine is a natural laboratory.

Thumbnail: “Turn on the light of victory,” Source Aerozvidka.

* Ambre Lepinay is a student in M2 International Relations at Inalco.