Since their birth at the end of the 19th century, the modern Olympic Games are, for the nations, a privileged platform allowing them to show their power. The foreign policy of Russia does not escape this imperative linked to the Olympic Games, whether it is an organizer or a participant. 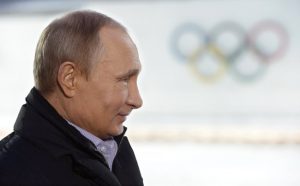 Since the Soviet era, sport has been an essential social and political element in Russia. The hygienic policy of the Soviet authorities and the will to dominate the American enemy on all levels pushed the USSR to develop a great sports culture(1). Even today, Vladimir Putin’s Russia is no exception. The Russian President, a sportsman, intends to use the sports tradition inherited from the USSR in his domestic and foreign policies.

The Sochi 2014 Winter Olympics were a demonstration of this culture. The candidature of Sochi had caused many doubts within the International Olympic Committee (IOC). The local climate, considered to be not very suitable for winter sports, and the lack of related infrastructure were first questioned. The proximity of Sochi to Abkhazia also seemed to pose a safety problem. However, V. Putin was able to decrease doubts during a speech - the first in English of his career - delivered on July 4, 2007, before the IOC: the city of Sochi was elected in 2007 to host the 2014 Olympic Games.

This event carried a solid will to grant a positive image to Russia. For that, Moscow has invested a record amount in the organization of the Games; the amount is said to have been about six times higher than the previous edition of the Games in Vancouver. Even if the Russian President himself denounced the overrun of the initial budget, it is clear that Russia was ready to all the sacrifices to make of this edition a resounding success, financial and sporting: Sochi saw the Russian athletes rise to the top of the general classification, with a historical harvest of thirty-three medals.

At first glance, the Sochi Olympics appear to be a total success for Russia: it showed that it was up to the pharaonic project of organizing the Winter Olympics in a city without the necessary infrastructure, and it proved the superiority of its athletes, a solid political message since the Cold War when the United States and the USSR were fighting for first place. Moreover, the victory at home was a way for the government to exalt the patriotism of its population.

From Rio 2016 to Pyeongchang 2018: the humiliation of exclusion

If Sochi could be presented as a bet won by Moscow and a perfect example of instrumentalization of sport for political purposes, these Olympics have also laid the groundwork for the slap in the face that would follow.

Indeed, a few months after these Olympic Games broke out, the Russian government organized the case of doping. The alert was launched in December 2014 by Yuliya Stepanova, an athlete specializing in 800 meters, and her husband, Vitaly Stepanov, a former employee of the Russian Anti-Doping Agency (RUSADA). A documentary broadcast in Germany revealed that the Russian high-level sports system is corrupted by doping(2). All Russian athletes who competed in Sochi were tested, and a significant number of tests were positive. The World Anti-Doping Agency (WADA) investigation revealed that the doping was not individual but institutional: rather than falsifying the results, the Moscow laboratory in charge of testing collaborated with the FSB to exchange positive bottles - supposedly tamper-proof - for negative ones(3). Initially, 43 Russian athletes who competed in Sochi were suspended for life from the Olympic Games, and 13 medals were withdrawn. However, it should be noted that in 2018, after appeal, 28 of them were cleared by the Court of Arbitration for Sport due to a lack of conclusive evidence of participation in institutional doping. Nine medals were returned to Russia, which retains its first place in the overall ranking of the Sochi Games.

The investigation results led the IOC to take sanctions for the following Olympics: from the Summer Olympics in Rio 2016, 111 Russian athletes were suspended out of 389 athletes selected by Russia. Then, on December 5, 2017, the IOC suspended the Russian Olympic Committee (ROC) for the 2018 Pyeongchang Winter Olympics. Therefore, Russian athletes who tested negative are obliged to compete under the Olympic flag wearing neutral colors, and the word “Russia” is completely erased from the Games.

In 2019, WADA’s turn to suspend Russia from all international competitions for four years, a sentence reduced to two years in 2020 after appeal. Concretely, this suspension translates into an obligation for Russian athletes tested negative to compete under the flag of the ROC until the Games of Beijing 2022.

This situation is experienced as a terrible humiliation in Russia. In 2014, when the affair broke out, Moscow was content to deny it all and accuse an international conspiracy. Then, as the number of suspensions of Russian athletes who tested positive increased, this discourse softened: Russia was obliged to put water in its wine if it wanted to succeed in alleviating the sanctions. However, it still maintains its classic victim posture, and when WADA suspends it from all international competitions in 2019, Prime Minister Dmitri Medvedev denounces a “chronic anti-Russian hysteria.” The government sees in these sanctions an umpteenth way for the West to push its Russophobic sentiment and isolate Russia. Far from the political success of Sochi, the Olympics generate a new sidelining of Russia on the international political scene, echoing the sanctions it has been subject to since the annexation of Crimea in 2014.

This humiliation is finally only a setback for the Russian policy on sports. By its victim attitude, Moscow has indeed managed to use the slur it has been given: it is easy to include its accusatory discourse towards an increasingly Russophobic and aggressive West in its global rhetoric.

At the same time, Russia manages to play off its suspension during the Tokyo 2020 Olympics: unlike the Pyeongchang 2018 Games, Russian athletes can then compete under the ROC flag, and they are allowed to wear the white/blue/red colors of Russia, while an excerpt from Tchaikovsky’s first concerto is played when they win an event. The hashtag #WewillROCyou, a reference to the famous song by Queen, is launched by the state channel Match TV, and the official Twitter account of the Russian government uses the hashtag to celebrate the medals of its athletes. Finally, Russia is present in all points except in name. According to Lukas Aubin, the #WewillROCyou campaign has four objectives: “To encourage Russian athletes, to crystallize patriotic feeling around the Russian Olympic team, to raise the head in a humiliating context and to politicize the event while depoliticizing it”(4). Indeed, Russia pretends to celebrate its athletes as any nation would do. Still, in doing so, it sends a strong political message: it asserts its presence despite the will of the IOC - of the West, it would say - to erase it from the competition.

Today, Russia is already preparing for the post-suspension era. While the sanctions will not be lifted until the end of 2022, Putin accepted last September the invitation of Xi Jinping to the opening ceremony of the Beijing 2022 Winter Olympics, which will take place on February 4(5). His participation is all the more symbolic as Western countries are preparing for a diplomatic boycott of the Games to challenge the Chinese regime’s many human rights cases of abuse(6). Once again, the Olympics crystallize the power relations between great powers.

Finally, the prospect of organizing the 2036 Summer Olympics in St. Petersburg, V. Putin’s hometown, is a significant objective in the Russian soft power policy. If the city manages to win the organization of the Games, they will be remembered as a potent symbol of Putin’s last term of office, which could hypothetically end this same year.

(5) Gerard Farek, “Vladimir Putin will attend Beijing Olympics despite Russian government officials being banned due to doping sanctions,” Around the Rings, September 17, 2021.

(6) The United States and, in their wake, Australia, the United Kingdom, Canada, and New Zealand announced in early December 2021 the diplomatic boycott of the Beijing 2022 Games.

* Gabrielle GUICHEUX is a student in M2 of International Relations at Inalco.