Two years after the onset of the Covid-19 pandemic, Serbia was tentatively beginning to recover. But the war in Ukraine has changed the picture and darkened the outlook for growth in 2023-2024. Is the Serbian economy out of breath? 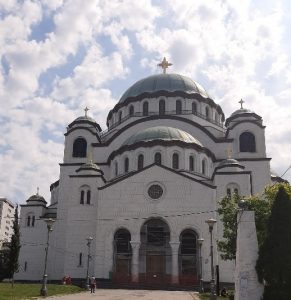 The legacy of Yugoslav self-rule (Samouprava) and the aftermath of the war in the 1990s have had long and devastating effects on Serbia's economy. Despite the fall of Slobodan Milošević’s regime in 2000 and Serbia's opening up to the European Union, the last two decades have been marked, economically, by alternating phases of “stop & go.” This erratic economic trajectory is linked to the political and economic context that followed the fall of the Milošević regime, as well as to more recent exogenous factors (health crisis, war in Ukraine).

Serbia's economic transition was inspired by the Washington Consensus, which in the 1990s called for the rapid implementation of a macroeconomic stabilization program, privatization, and liberalization. Positive effects were quickly observed, but these choices also brought surprises. Between 2000 and 2003, the inflation rate was relatively high in both Serbia and Montenegro because of the liberalization of prices made possible by establishing a more democratic regime(1). The European Bank for Reconstruction and Development (EBRD) forecast in 2002 predicted optimistic growth prospects for the next five years. Successive waves of privatization have also contributed to rising unemployment (27% of the labor force in 2000 and 29% in 2002). The combination of unemployment, falling production, and a lack of foreign direct investment has led to a decline in living standards and ever greater dependence on international aid. Serbia benefited from the Instrument for Pre-Accession Assistance (IPA), which enabled it to prepare for EU integration in 2007. This instrument was based on three programs, namely PHARE, ISPA, and SAPARD, with the addition of the CARDS pillar, which is specific to the Balkans. The latter has primarily benefited Belgrade, granting 1 billion euros over 2000 - 2006(2). The total amount of European IPA I funds for the period 2007-2013 was around 11.6 billion euros, of which 13.8% was allocated to Serbia(3), to which can be added support for the EU's Stabilization and Association Agreement (SAA), the adoption of World Trade Organization (WTO) standards, and participation in a regional free trade area.

From 2001 to 2008, average GDP growth was entirely satisfactory, averaging 5.4 percent despite a slowdown in 2002-2003. However, the historical legacy also had to be dealt with: once a pillar of self-management, industrial production fell due to a lack of investment and the damage caused by the NATO bombing, reaching only 52 percent of its 1989 level in 2008. The decade 2000 was thus marked by an industrial decline and a polarization of the economy on agriculture and manufactured goods, excluding medicines, energy, and vehicles. Over this period, the Serbian political and economic scene experienced several crises (assassination of Zoran Đinđić in 2003, separation of Serbia from Montenegro in 2006, proclamation of Kosovo's independence in 2008, subprime crisis in 2008/2009), hindering the country's economic development.

From 2014 to 2020, Serbia could benefit from IPA II assistance (nearly 11.7 billion euros in total). This program had one overall objective (strengthening regional cooperation) and four specific objectives (political, economic, and those inherent in compliance with the acquis communautaire)(4). The set of measures put in place, as well as regional cooperation under the SAA that came into force in 2013, have enabled Serbia to gradually emerge from the recession and strengthen trade with its European neighbors. Serbian imports from the EU have thus increased from 7.4 billion in 2007 to 13.9 billion euros in 2019.

On the macroeconomic level, Serbia has implemented quite relevant policies. The GDP growth rate has been moderate (4.3% on average since 2018)(5). In 2020, an exceptional year due to the Covid-19 pandemic, GDP hovered around -1%(6). But overall, growth has been sustained over the 2014-2019 period, mainly thanks to domestic demand.

Serbia remains an essential exporter of manufactured goods and agricultural products. The inflow of FDI is also helping to offset the macroeconomic shock. The share of foreign exchange reserves has grown significantly (covering the equivalent of six months of imports, which is a significant safety net). Inflation has been relatively low in 2019, hovering around the 3% threshold, thanks to a prudent monetary policy. On the employment front, clear improvements have been noted due to increased hiring (the unemployment rate is estimated to have fallen to 10.7 percent of the labor force in 2019, down from 23.9 percent in 2012. The decline also affected women, youth, and the long-term unemployed. However, this upturn halted in March 2020, with the onset of the Covid-19 pandemic.

In a few months, many countries, including Serbia, have been brought to their knees by the pandemic outbreak. In 2020, according to the Central Bank (NBS), the country will experience a GDP contraction of around -1%; however, this will be followed by a strong recovery in the first two quarters of 2021 (+1.8% and +13.7%, respectively), and international experts are expecting an average GDP growth of 5% by the end of 2021. Inflation was relatively low in 2019 (around the 3% threshold) and was then contained by a prudent monetary policy(7). The NBS supported the banking and financial system by gradually lowering the key interest rate from 2.25% in March 2020 to 1% in December 2020. Finally, fiscal measures were adopted in 2020 to address the public spending needs related to the fight against the pandemic. Overall, the analyses show that the distribution of expenditures was not appropriate in the end, given the financing needs, particularly in infrastructure. Indeed, the budget adopted in April 2020 envisaged a deficit of 6.9 percent of GDP. The Serbian government adopted fiscal measures impacting businesses and households to cope with this. The public deficit reached 4.1 percent of GDP in 2021. Public debt, meanwhile, fell slightly between 2015 and 2019, from 70 to 52 percent. Then it increased due to the expenses inherent in the fight against Covid-19. In the 3rd quarter of 2021, it stood at 56.7% of GDP.

Overall, real GDP growth of 7.4 percent in 2021 was driven partly by personal and public sector consumption and fiscal measures. Services, construction, and industry sectors experienced the most vigorous activity. However, according to the latest report from the European Commission, the economic outlook has been clouded by the war in Ukraine.

The significant impact of the war in Ukraine

The war launched by Russia in Ukraine has plunged countries worldwide into an unprecedented political, economic and social crisis. The international political chessboard has been shaken by the return of war to European soil, with a domino effect on all sectors of the economy. The food and energy problems, particularly, have revealed the economic fragility of certain countries, including Serbia.

Serbia’s historically ambiguous position vis-à-vis Russia has not protected it from the negative consequences of the conflict on its growth and production. Indeed, as the latest European Commission report(8) highlights, growth forecasts for 2022 are only 3.4%, driven by household consumption and investment. Growth in 2023 is forecast to be around 4% - well below the performance of 2019 and 2021.

The war in Ukraine is having a noticeable impact on inflation, which is alarmingly high: 9.1 percent in March 2022, with a notable increase in food and energy prices. The Serbian government has already announced a 30% increase in the cost of electricity in the coming weeks. This high inflation could also have medium- and long-term consequences because of the pressure on purchasing power and, by extension, on growth. The European Commission expects inflation to peak in mid-2022, decline incrementally during the fall, and then return to below 5% in the first quarter of 2023.

The Serbian economy has been able to cope with these exogenous shocks thanks to international aid and public spending, which has further increased the public debt (57.8% of GDP in 2020 and 57.9% in the first quarter of 2022). These measures have served as a “social shock absorber” to avoid mass unemployment and the population’s impoverishment but at the cost of a substantial public debt. In addition, the Serbian political context was marked by the presidential election, which fostered a climate of appeasement and support for the economy to preserve social peace. Finally, on the international level, the war in Ukraine has impacted trade, particularly between Serbia and its European partners.

The succession of the Covid-19 pandemic and the war in Ukraine abruptly halt Serbia’s economic recovery. However, thanks to international aid (financial and material), mainly from European partners, Serbia has managed to keep its head above water and return to growth and employment. From now on, uncertainty reigns all the same, depending on the evolution of the conflict in Ukraine.

* Jelena JOKIC is a PhD student in economics at the Centre de Recherche Europes-Eurasie (CREE) of INALCO.