Dependent on Russian aid, the de facto republic of Abkhazia has been arming itself in recent months with tools designed to implement its communication strategy, following the model of its protector. The movement is based on the Russian conception of the information space and mobilizes actors experienced in conducting these policies. 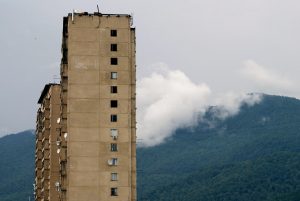 On February 16, 2022, the Minister of Foreign Affairs of the de facto Abkhazian state, Inal Ardzinba, received a distinguished guest in Sukhumi, the capital of this unrecognized state: a few days before the launch of the Russian military offensive in Ukraine, Margarita Simonian visited the Moscow-backed Abkhazian administration. She is the editor-in-chief of the Russian state communication agency Rossia Segodnia (which includes the news websites Sputnik) and of the state-funded 24-hour TV news channel RT (formerly Russia Today).

The Abkhazian communication is renewed.

Mr. Simonian's visit had a specific purpose. It was to prepare for the launch of the new multifunctional media center of the Abkhazian Ministry of Foreign Affairs, headed since November 2021 by the 31-year-old Abkhazian technocrat Inal Ardzinba. Margarita Simonian returned to Abkhazia on March 29, 2022, to inaugurate the center alongside de facto Abkhazian President Aslan Bjania and his foreign minister(1).

The launch of this communication organ reflects the new Abkhazian ambitions, particularly that of "activating the information policy.” A policy that Russia knows well, Mr. Simonian, spearheading it, did not hesitate to speak of "information war" to refer to the field in which the branches of Rossia Segodnia or RT are operating. This event has a particular significance for Russia: it was indeed after the Russian-Georgian war in 2008 that Moscow restructured this policy, and the information tools became offensive(2). Logically, it is in collaboration with the Department of Information and Russian news agencies that the multifunctional media center is operating today. According to the Abkhazian Ministry of Foreign Affairs, it is being developed in a context where Georgia is waging a hybrid information war. The aim is also to identify who is writing about Abkhazia and "to respond with the appropriate means," said I. Ardzinba during a public video conference with Maria Zakharova, spokeswoman for the Russian Foreign Ministry(3).

The media center’s mission will be to convey a positive image of Abkhazia, with the ultimate ambition of recognition by as many states as possible of Abkhazian independence. In the spring of 2022, the media center constitutes only a Russian-speaking Telegram channel, followed by more than 5,000 users, which comments on international news by taking up the themes and angles of the Kremlin. The channel also communicates the activities of the local Ministry of Foreign Affairs, relaying, for example, interviews with Minister Ardzinba at Vladimir Soloviov, a star journalist in Russia.

A Russian minister in Abkhazia?

This impetus for Abkhazian communication comes a few months after the appointment of Inal Ardzinba (he is the namesake of the first de facto Abkhazian president, Vladislav Ardzinba, but no official relationship has been claimed) as foreign minister. This promotion established a political figure destined to play a leading role in local politics.

But if he now officiates in Abkhazia, where he was born, it is in Russia that he was trained, with key figures in Kremlin politics. The graduate of the School of Advanced Studies in Economic Sciences in Moscow is, in 2012 and 2013, the head of the Russian delegation at the G8 and G20 youth summits. In 2014, I. Ardzinba joined the Russian presidential administration in the office for issues related to relations with the CIS states, Abkhazia and South Ossetia. I. Ardzinba will work on issues related to Ukraine; he will even be accused in 2015 by Kyiv of involvement in terrorist activities(4).

The student of one of the brains of the Kremlin

During this period, the office was headed by a certain Vladislav Surkov, considered the "demiurge of the Donbas" and one of the people who allowed Vladimir Putin to come to power. He was also one of the Kremlin's eminences grises, having brought the concept of sovereign democracy to the fore. V. Sourkov also played a role in constructing the Russian information policy since the end of the 2000s. After the shock of the Russian-Georgian war in 2008, when Russia became aware of the importance of imposing its version, V. Surkov forced Yandex (the Russian search engine, equivalent to Google) to change its algorithm of search results so that it would set the government's narrative line(5). These events begin the project to build the “Runet,” the Russian sovereign Internet, thanks to promoting the country's information systems supporting the official version of the facts(6).

While the de facto Abkhazian authorities mainly depend on Russia for their economy and defense, the turn has taken since the appointment of I. Ardzinba to the minister post can also be seen in the desire to impose robust control overflows into or out of Abkhazian territory. In January 2022, the new minister brought together the prominent leaders of Abkhazian NGOs to prohibit any informal dialogue between Georgia and Abkhazia, a measure long desired by the Kremlin, which demands that Abkhazia follow the example of the law on “agents of foreigners”(7), widely used in Russia.

The tightening of communication around a media pole and the hardening of the posture towards NGOs attest to the harmonization between de facto Abkhazia and Russia on the issue of a sovereign information space. This approach aligns with the Kremlin, which seeks to export its vision of this space. In this perspective, Abkhazia is developing, on its scale, the tools of its public diplomacy on the Russian model.

The empowerment of a “client” state

This move marks the new posture of the Russian state in its relationship with de facto Abkhazia. Indeed, as part of the multiple packages of sanctions adopted against Russia since the launch of its war against Ukraine, the Kremlin would like to deal with a more financially autonomous Abkhazia(8) despite its increased dependence in several sectors - such as energy - since the de facto Abkhazian Republic has been going through a major crisis(9).

Despite the ongoing rapprochement between the two entities and the general geopolitical context, the Abkhazian administration continues to make solid claims for independence, unlike South Ossetia/Tskhinvali. The construction of an offensive posture in the informational field, with the ultimate goal of global (but Russian-sponsored) recognition, shows the ambiguity and contradictions on which the Abkhaz de facto state continues to build.

* Robin Leterrier is a student at the French Institute of Geopolitics of the University of Paris 8.