Inaugurated in 2007 on the site of the only Soviet concentration camp to have incarcerated an all-female population, the "Akmola Camp for the Wives of Traitors to the Fatherland" (ALZhYR) memorial reminds us that Kazakhstan was, during the period of Stalinist repression, a land of deportation and imprisonment in the Gulag. 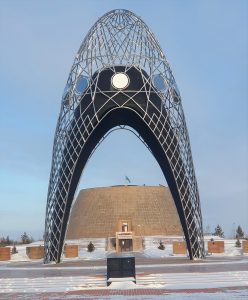 From 1938 until its closure in 1953, the Alzhyr camp saw the passage of 18,000 women (8,000 of whom remained in relegation), wives, mothers, sisters, or daughters of "enemies of the people" who were themselves shot or sent to the Gulag. Located 35km from the current capital of Kazakhstan, Astana, the camp has created a museum and memorial complex dedicated to the victims of political repression and totalitarianism. 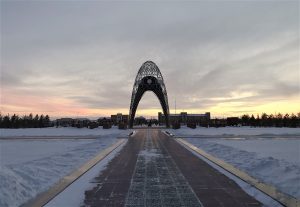 The Memorial is dominated by a high black and silver monument, the Arch of Sorrow, symbolizing the traditional Kazakh wedding headdress and the passage between the world of the living and the dead. On either side are statues of a woman ("Struggle and Hope") and a man ("Despair and Powerlessness"), evoking the hope that was possible for these prisoners who were still alive, as opposed to the incapacity of the men, many of whom had already been executed. 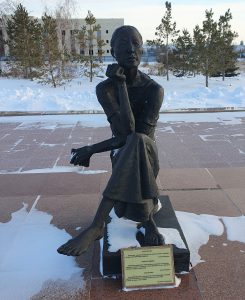 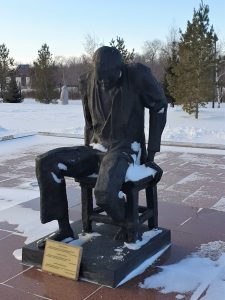 Transported from all parts of the USSR, sometimes for two months, in wagons where occasionally more than 70 people were crammed, the women had to build the barracks that would house them with their own hands. 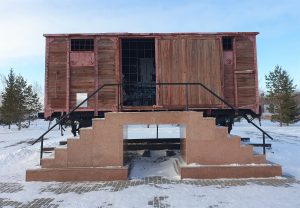 The women prisoners were employed in sewing work (especially during the war, to provide equipment for Soviet soldiers) and used to collect reeds in the vicinity for heating. 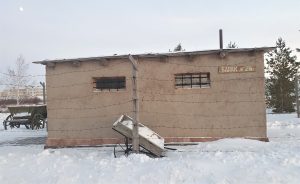 It is said that the inhabitants of the neighboring village sometimes hid food in these reeds for them. Or that one day, children threw them what they at first thought were stones before realizing that they were "qurt," the traditional cheese of Kazakh nomads, made from fermented milk and presented in the form of balls resembling small white stones. 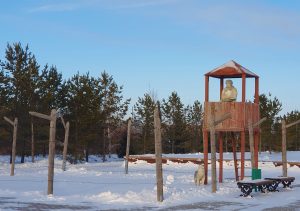 The Alzhyr Memorial was the wish of Kazakhstan's first President (1990-2019), Nursultan Nazarbaev, who inaugurated it with great pomp and ceremony on 31 May 2007 and gave a powerful speech, clearing his country of any responsibility and denouncing the ravages of Stalinism: "Through no fault of its own, the Kazakh land took in 1.5 million people who were sent to concentration camps. Through no fault, Kazakhstan took in 1.3 million people deported from all regions of the USSR. Let us pay tribute to those who were murdered by their state, wantonly and without purpose. Hitler killed - and this is also blasphemy - Jews, Russians, and Soviets- all he was fighting against. On the other hand, the authorities in our country massacred their people. This has never happened in any other country! [...] "

Eleven Gulag camps, including the vast Karlag (Karaganda camp), were spread across the territory of Kazakhstan. In this country alone, 103,000 people were arrested during these years of repression, and 25,000 were shot, decimating the intelligentsia and the national workforce. Since 1997, 31 May has been celebrated as the Day of Remembrance of Political Repression, which also includes 'acharchylyk,' the Kazakh equivalent of the Ukrainian Holodomor. In addition, this great famine killed millions of peasants during the collectivization campaign of the early 1930s. 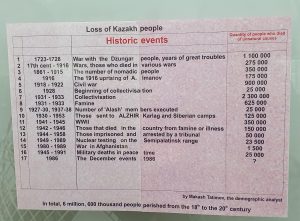 The Alzhyr Museum evokes the repression suffered by the country throughout the 20th century and documents what life was like in this camp. In particular, it presents a count of the prisoners by nationality: 4,390 Russians, 855 Jews, 740 Ukrainians, 173 Poles, 169 Germans, 146 Georgians, 134 Byelorussians, 102 Latvians, 87 Kazakhs, and 70 Tatars... Among them – were 4 French women. 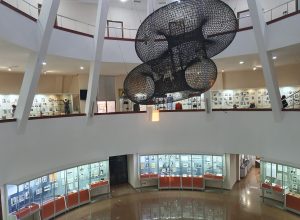 The following were imprisoned in this camp: the singer Lidia Ruslanova (wife of General Krioukov), Kira Andronnikoshvili (wife of Boris Pilniak), the actress Tatiana Okounevskaïa (raped by Beria, who tried to blackmail her), Bukharin's wife, Anna Safonova (Kolchak's companion), the writer Galina Serebriakova (whose father, husband and ex-husband had been arrested), Tukhachevsky's sister, the mother of Bulat Okudzhava... 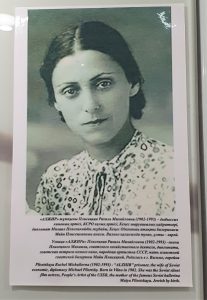 Rachel Plissetskaya, born in Vilna in 1902, was a silent film actress, wife of the diplomat Mikhail Plissetski and mother of the ballerina Maia Plissetskaya,

Some women arrived in the camp with children under the age of 3. After that age, if they had not died of cold, hunger, or disease, they were taken away from them and sent to orphanages. After the camp's closure, it was estimated that 1,507 women gave birth during their confinement after being raped by the guards. 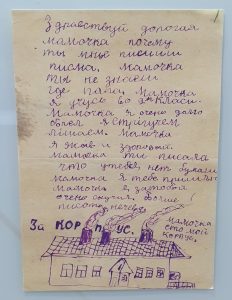 A "Wall of Memory" surrounds the museum, bearing the endless rows of names of those who spent months or years in the camp. So many died there, their bodies buried in mass graves near the site. 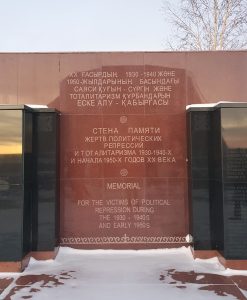