The Loire-Atlantique department hosts a population of several hundred Bulgarian economic migrants who have settled in or near several localities - Saint-Nazaire, Nantes, and Ancenis-Saint-Géréon - with their families. 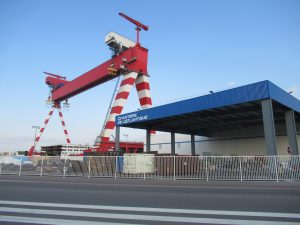 The liberalization of visas between the European Union and Bulgaria, which came into effect on April 10, 2001, has favored the geographic mobility of many Bulgarian nationals toward Western Europe, eager to find employment. In France, many of these migrants have taken up residence in the Paris and Lyon regions, as well as in Strasbourg, the Bordeaux region, the southeast, and Occitania.

They have also been present in the Loire-Atlantique region since the 2000s, a presence that has gradually increased without creating tensions with the native population. The newcomers are mainly technicians, executives, or expatriates who have adapted to the needs of the French labor market, occupying specific, technical, and specialized economic niches. They settled in three different regions of the department, depending on the opportunities provided by the local job market (shipyards, construction, freight transport, etc.), as well as on the skills they possessed or on community sponsorships (people vouching for the employer) directly favoring their access to employment.

Construction and shipyards, the two niches at the origin of the establishment in Saint Nazaire

The first arrivals of Bulgarians in Saint-Nazaire date from the first half of the 2000s. They were Bulgarian Turks from the district of Bourgas, working illegally on specific construction sites in the city. From 2007, these employees were able to be regularized following the accession of Bulgaria to the European Union. This Bulgarian Turkish community has continued to grow, with many families still bringing in relatives and acquaintances and then employing them by declaring them(1). But this is not the only economic niche offering local employment to Bulgarian nationals.

The STX shipyard, successor to Chantiers de l'Atlantique, was founded in Saint-Nazaire in 2008. Since its creation, the company has used subcontractors employing foreign workers to keep production costs competitive. Several Bulgarian workers were recruited as early as August 2008. Unhappy with their working conditions, eleven of them went on strike against one of these intermediary companies, Litana France SAS, denouncing the lack of paid vacations and wages deemed too low for their qualifications. In 2009, an agreement was finally reached in this case, and the workers could return to Bulgaria with financial compensation.

Subsequently, the presence of subcontracted workers has continued to increase, replacing part of the French workforce. A workforce of 2 to 3,000 foreign workers (Eastern and Southern Europeans) employed by these subcontracting companies has worked at the shipyard recently; among them are several hundred Bulgarians (partly used by the subcontractor ULA Ltd). In the vicinity of the shipyard, several dozen passenger vans (Transit, Vivaro, etc.) are registered in Bulgaria, which provides transport between the dormitory hotels and the shipyard. Most come from Varna and Bourgas port cities and work on the site as naval welders, HVAC (heating, ventilation, and air-conditioning), pipe fitters, electricians, and fitters. While some of these workers have settled in Loire-Atlantique with their families, others have traveled back and forth between Saint-Nazaire and Bulgaria to be with their families. The wives who settled down sometimes managed to be recruited as cleaners. With the increase in the number of children, two local expatriate associations (Nadezhda and Rodna Retch) decided to found Bulgarian schools in Saint-Nazaire - projects that were, however, disrupted by the successive confinements linked to Covid.

Today, nearly 400 people, families or lone men, live in the commune or neighboring towns, particularly in Guérande or Saint-André-des-Eaux. They have not disoriented: thanks to the Bulgarian grocery store in Saint-Nazaire, they can quickly obtain traditional food products; during the Bulgarian elections, they occasionally open a local voting section(2).

A diffuse and discreet presence in the Nantes agglomeration

Among the Bulgarians in Nantes are working people from various professions (executives, computer specialists, shopkeepers, etc.) and former students who have graduated from the University of Nantes over the past twenty years(3). Some have formed mixed couples, and a small community has formed around them, occasionally organizing events to allow expatriates to get together. For example, a few dozen expatriates gathered during the 2018 Christmas festivities organized by the local Bulgarian association on the premises of the Maison de l'Europe in Nantes, and the organizers of the event, former students who are now active and mothers, had the idea of founding a friendship group. This project became a reality in 2019 with the creation of the Franco-Bulgarian Association in Nantes, which organizes an associative life centered around the Bulgarian language and culture (traditions, music...). The health crisis disrupted its agenda and delayed its development, but as of October 2021, monthly introductory workshops to the Bulgarian language have been set up. The association now has about 50 active members, most of whom studied in France, and celebrates the main holidays (Baba Marta in the spring, Easter, and Christmas).

The settlement of Bulgarian truck drivers and their families in Ancenis

In 2008, the limited company BOMEX, located in the town of Saint-Géréon, near Ancenis, and specialized in road transport of goods, sought to diversify its activity by opening an agency in Sofia, Bulgaria. The new structure quickly filled its order book by finding local customers who wanted to export their products to Central and Western Europe. The agency recruited up to 40 Bulgarian drivers who regularly crossed Europe from East to West (France, Germany, Italy, and Spain) before returning to Eastern Europe with other goods(4).

For the employer, hiring these Bulgarian drivers proved to be very advantageous, not only for financial reasons (wages remain very low in Bulgaria, and the workforce is skilled) but also in terms of availability: the drivers were ready to be on the road for a whole month, which was usually more complicated for Western drivers. The professional loyalty of these particularly flexible employees encouraged their employers to help them with their administrative procedures. Between 2014 and 2016, nearly forty of these Bulgarian drivers wishing to benefit from the advantages granted by an employment contract under French law (in particular the protection of Social Security) thus came to work in Saint-Géréon in the BOMEX company(5).

In 2016, BOMEX, which was in liquidation, was taken over by Transports Garnier, an entity that continued to employ Bulgarian drivers. But some truckers who arrived before 2016 chose to follow one of BOMEX's former managers, who founded a competing company, Rouxel, which was established in Ancenis, near Saint-Géréon. Now, nearly twenty Bulgarian drivers work there. They have taken French courses paid for by their employer and have benefited from the company's support for their administrative procedures, which has helped to strengthen their social integration. Like their colleagues at Garnier, they have gradually settled with their families in the region (Ancenis, Saint-Mars-la-Jaille, Pannecé, Couffé, Belligné, etc.), where they have bought houses. They are mainly Bulgarian nationals from the districts of Pazardzhik, Plovdiv, and, to a lesser extent, Veliko Tarnovo and Roussé. This presence was highlighted during the Bulgarian legislative and presidential elections of 2021, as expatriates requested and obtained the opening of a polling station during these elections: 67 Bulgarian voters turned out, fewer than in Saint-Nazaire but more than in Nantes (where 33 voters voted)(6).

Bulgarian economic migration is continuing in Loire-Atlantique, as elsewhere in France, and the needs in the shipbuilding, construction, and road transport sectors offer and should continue to offer numerous job opportunities for expatriate candidates over the coming years.

(1) Interviews with a trade unionist from the STX shipyards, a former Bulgarian employee of the shipyard, an interpreter is working with the Bulgarian community, and a member of the Rodna Retch expatriate association. Visit the shipyards near parked microbuses registered in Bulgaria and carry out daily shuttles to bring the workers from their place of living to work.

(2) Glasuvam.org (electoral list) and report no. 326200755 drawn up by the electoral section of Saint-Nazaire and validated by the Central Electoral Commission (cik.bg portal).

(3) Interview with three members of the association board, a Franco-Bulgarian of Nantes, and an interpreter of the community.

(4) Interviews with a former BOMEX executive, a local elected official, and a Bulgarian employee of a road transport company; trips to the Garnier company site between August 25, 2021, and January 13, 2022; observation in Ancenis-Saint-Géréon, monitoring on social networks

(5) The agency in Sofia was founded by BOMEX but is separate from this company. Therefore, the Bulgarian company alternately employed the employees (filling orders placed by BOMEX, the principal) and then by BOMEX directly once they were used in France with contracts under French law. We cannot, therefore, speak strictly speaking of seconded labor. It would rather be a transfer of employees and skills between a parent company and one of its subsidiaries.

* Stéphan Altasserre has a doctorate in Slavic Studies and specializes in the Balkans.