As various crises have shaken the post-Soviet space in recent months, attention has turned to the Collective Security Treaty Organization (CSTO), the supposed guarantor of stability in the Eurasian region. Is this a test of its relevance? 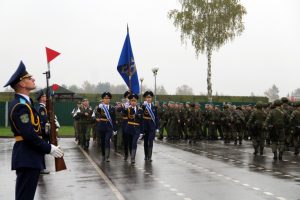 The popular revolt in Belarus, the renewed conflict in Nagorno-Karabakh, the political chaos in Kyrgyzstan... recent developments on Russia's doorstep raise questions about its ability to control events in its "near abroad. The role of the CSTO, which Moscow largely dominates, needs to be clarified more than ever: what room for maneuver does an organization that seems to be struggling to adopt a clear position and assert itself on the international scene have? Would the reproaches formulated by the French President about NATO, his rival organization, also apply to it?

Origin and objectives of the Organization

The CSTO was created in 2002 as the eastern counterpart to NATO, as a military alliance under the Collective Security Treaty (CST), established after the dissolution of the Warsaw Pact. Its prerogatives at the time of its creation, which are pretty classic, concern the "strengthening of regional and international peace, security and stability" and the "protection of the independence, territorial integrity, and sovereignty of its member states" (Article 3 of the CSTO Charter)(1).

The organization is more oriented towards Central Asia than Eastern Europe and suffers from competition from other regional alliances. Thus, while it aspired to bring all ten member states of the Commonwealth of Independent States (CIS) into its fold, some of them preferred to join GUAM (Organization for Democracy and Development, which brings together Georgia, Ukraine, Azerbaijan, and Moldova), a body that advocates closer ties with Euro-Atlantic organizations (some, like Georgia, are considering joining NATO).

Thus, the CSTO today includes Armenia, Belarus, Kazakhstan, Kyrgyzstan, Tajikistan, and Russia, whose predominant role is undeniable. This is evidenced by Russian military bases and facilities scattered throughout the member states, the free training of senior officers provided by Moscow to its partners, and the supply of weapons at preferential rates.

While the organization has specialized over the years in the fight against terrorism and drug trafficking, it has also deepened its military cooperation: article 4 of the CST, which echoes article 5 of the North Atlantic Treaty, establishes the principle of solidarity in the event of aggression by a member state. In 2009, the Collective Rapid Reaction Forces (CRRF) were created with this in mind. Today, with 18,000 troops, they form the core of the organization's collective security system(2).

Given the Organization's objectives and attributes, do the recent crises in its area of responsibility call for intervention on its part?

The recent political developments in Kyrgyzstan, where street protests against the election results led to the resignation of President Jeenbekov and the installation of a new Prime Minister who immediately proclaimed himself President, although closely followed by the CSTO, provoked only a discreet reaction on its part, with the additional dispatch of Russian officers to the Kant military base, east of Bishkek. The Organization also declared on October 6, at the beginning of the crisis, that the Kyrgyz side had made no request for assistance and that it considered this to be an internal matter for the country. The new government quickly assured Moscow that the country had no intention of leaving the CSTO and was considering expanding the Kant air base, one of three Russian military facilities.

If the coup in Bishkek did not fall within the direct prerogatives of the CSTO, it is because the CSTO is primarily concerned about foreign threats and interference. The CSTO's Collective Defense Strategy until 2025, adopted in October 2016 in the wake of the Ukrainian crisis, thus gives a central place to the external risks of political destabilization to uniting the member states around a joint project that goes beyond the diversity of regional contexts.

The scarecrow of the color revolutions in Belarus

Suppose, in the case of Kyrgyzstan, it is not appropriate to evoke an external influence in an internal conflict resulting from the historical opposition between the south and the north of the country. In that case, Belarus offers a different point because of its geographical and geopolitical situation.

Thus, the popular revolt that has shaken the country since the fraudulent election of August 9 has been repeatedly presented by Alyaksandr Lukashenka as an attempt at a color revolution orchestrated by the West. While the Russian Minister of Defence has also recently stated that the attempted takeover of Belarus was carried out with the political and financial support of Western countries, the general position of Russia since the beginning of the crisis has been more cautious: it is a question of not repeating the Ukrainian scenario and of avoiding alienating once again a population that was not necessarily hostile to it in the beginning.

However, the expectations of the Belarusian authorities are noticeable. Given the Belarusian chairmanship of the CSTO in 2021, A. Lukashenka, during his meeting with the Secretary-General of the Organization, Belarusian Stanislav Zas,(3) spoke out on 15 October in favor of developing its role. Significantly, the annual military exercise of the CSTO peacekeeping forces, "Nerushimoe bratstvo" (Indestructible Brotherhood), scheduled this year in Belarus, was maintained despite the health crisis: the Nerushimoe bratstvo maneuvers were held in the Vitebsk region of northeastern Belarus from 12 to 16 October. A month earlier, Moscow had organized the Slavic Brotherhood exercise in Belarus in the absence of Serbia, which had initially planned to take part but gave up at the last moment, denouncing "pressure" from the European Union.

While, among the six CSTO countries, Kyrgyzstan and Armenia have also canceled their participation in the Indestructible Brotherhood exercise, Moscow's decision to maintain these maneuvers on Belarusian soil(4) amid a political crisis can be interpreted as a demonstration of strength by a Russia that wishes to show its determination to continue to influence its neighborhood. 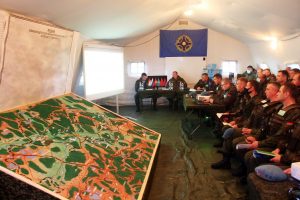 The war in the South Caucasus that began on September 27, 2020, would have been the most likely to provoke a CSTO intervention. As soon as Azerbaijan, supported by Turkey, attacked the self-proclaimed republic of Nagorno-Karabakh, the question of Armenia's legitimacy to appeal to Article 4 of the CST was raised. Its implementation would have implied a new widening of the conflict, with the entry into play of Russia, present on Armenian soil through its base in Gyumri, in the northwest of the country. Given Turkey's commitment to Azerbaijan, it would have led to a confrontation between NATO and the CSTO.

Since the Azerbaijani fire was initially concentrated on the territory of Nagorno-Karabakh (whose sovereignty is not recognized), the Kremlin insisted that it was not the responsibility of the CSTO to intervene. Russia, which has strong economic ties to Azerbaijan, which has made a shift to the West while at the same time sparing its Moscow partner, sought from the start of the conflict to ease tensions and return to a peace process. Its position was initially made more delicate because it co-chaired the Minsk group alongside France and the United States. While Paris, through the voice of its Minister of Foreign Affairs, made it clear that this role prevented it from taking sides in the conflict and abandoning any neutrality, could Russia use the same argument when a military alliance links it to Armenia?

Its balancing act became even more delicate after Baku claimed responsibility for strikes against missile launch sites located on Armenian territory on October 14. On October 16, referring to one of the CSTO's prerogatives, Yerevan also insisted on the risk to regional security posed by sending jihadist mercenaries by Turkey and described Azerbaijan as an "international center of terrorism.

With the ceasefire agreement signed on November 9 by Armenia and Azerbaijan under the aegis of Russia, the latter has taken over the reins of the conflict and now finds itself in a position of strength in the region. It has dealt a heavy blow to the Minsk group, which was excluded from the negotiations, while allowing a major regional player, Turkey, to enter (Ankara is insisting that Turkish soldiers take part in observing the cease-fire from the future particular peacekeeping center). But what about the CSTO forces? The Russian military(5) present during the Indestructible Brotherhood exercise has already been sent to the Caucasian theater. They are currently implementing the peacekeeping operations mechanisms repeated just a month ago on completely different terrain in Belarus. However, while a CSTO’s Military Committee meeting was held on 19 November, the Organization remained silent on the possible establishment of a contingent under its mandate.

The agenda for the next CSTO summit, scheduled for December 2, promises to be complete. At a time when three of the six CSTO member countries are affected by profound upheavals, it seems interesting to go back to the origin of President Emmanuel Macron's remarks on NATO to answer the question of the CSTO's supposed vegetative state: while the French President's shocking phrase denounced a glaring lack of coordination of the Alliance's action, against the backdrop of the incursion undertaken unilaterally by the Turkish President in Syria in October 2019, the polarization of the CSTO around Russian power is indeed what seems to be holding the organization together. The material and humanitarian aid it implies for the member countries is unquestionably attractive and perceived as stabilizing.

However, in Nagorno-Karabakh, Russian-supplied weapons were no match for Turkish and Israeli drones. While the CSTO is undoubtedly part of Russia's arsenal of influence in the countries of the former USSR, these alliances may prove embarrassing for a centripetal Russia. V. Putin's caution about the Belarusian crisis and his reluctance to get involved in the Nagorno-Karabakh conflict from the outset shows the limits of Russia's instrumentalization of the CSTO and the downside of its influence when it turns into responsibility.

Therefore, if Russia gives its impetus to the CSTO, it is also capable of paralyzing it. The brain is nothing without a functional backbone. However, developing bilateral relations with the Russian common denominator is not enough to form a solid whole. Instead, this phenomenon reflects limited confidence in the CSTO's ability to act. Significantly, on October 31, Armenian Prime Minister Nikol Pachinian(6) asked Russia to consider what assistance it could provide to Yerevan, citing not the CSTO alliance but a Russian-Armenian Friendship Treaty from 1997.

* Anna BRAKHA is a Master 2 International Relations student and Russian language at INALCO.