In Ivanovo, every May 28, dozens of young women in wedding dresses parade through the streets to honor the city’s nickname since the middle of the 19th century: the City of Brides. 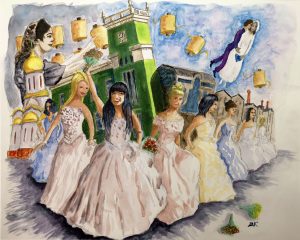 Ivanovo is a medium-sized Russian city, with a population of 400,000 in 2020, located 250 km northeast of Moscow. The town of origin of the writer Nathalie Sarraute and one of the most famous cities of the Golden Ring(1), it nevertheless escapes the radar of the tourist guides. In fact, in addition to its churches, bulbous cathedrals, and typical landscapes, the city is known for a somewhat surprising phenomenon. Since the time of imperial Russia, Ivanovo and its region have specialized in light industry, mainly textile: cotton and linen are its playgrounds. Although the Soviet central government abandoned the textile industry in the 20th century in favor of heavy industry, it has remained the privilege of Ivanovo because of the local historical experience in this field. The city has become the principal place of textile production in the country. During the Soviet period, the town had about 40 spinning or weaving factories, mainly employing female workers. A rarer feature was that women also ran most Ivanovo enterprises. Thus, from the Second World War onwards, the ratio of men to women in Ivanovo became unbalanced, reaching two-thirds of women to one-third of men at the end of the war(2). As elsewhere in the USSR, but even more so because of these specific characteristics, young women from the countryside were mobilized to work in factories while young men were sent to the front. Aware of the problem that this disparity could cause, the Soviet government established some machine-building factories to attract men after the war, but this was not enough.

Today, the situation has improved slightly due to the textile crisis of the 1990s, the arrival of highly competitive Asian countries in the sector, and the closure of some factories in Ivanovo. However, 60% of the city’s population is still women, making it the largest city in Russia in terms of gender disproportion in its population(3).

Russia’s demography is not very dynamic, with a low birth rate and a worrying life expectancy, particularly for men. The average number of children per woman is 1.5, a figure that must be considered given regional and cultural disparities (2.5 children per woman are recorded in regions with a Muslim majority, which raises the national average). The lowest fertility rate was, not surprisingly, reached during the 1990s (1.16 children per woman in 1999), the dark decade of contemporary Russian history. This is the cause of the demographic gap in the country today, characterized by a low share of thirty-year-olds, regardless of gender. This deficit is reflected in the low birth rate, the shortage of workforce, and the lack of military recruits.

For this reason, the Russian government has been offering financial and in-kind maternity bonuses since 2006. Between 2000 and 2040, Russia is expected to lose 7 million people out of a total population of 147 million. Ivanovo is no exception to this phenomenon: the city loses an average of 5,000 inhabitants per year.

The disparity between men and women marks life expectancy in Russia. According to a forecast for 2020-2025, women will live an average of 78 years, against 67 years for men. These eleven years of difference are not negligible in a country that is still very patriarchal, where women have much lower pensions than men and find it difficult to find work after 50. The reasons for the low life expectancy of Russian men include violence, non-hereditary diseases, accidents, and, to a lesser extent, HIV, which affects 1% of the Russian population. Thanks to the measures taken against alcoholism(4), there has been a clear improvement since 2010, when male life expectancy was only 63 years.

Since the 1990s and the abrupt disappearance of state subsidies, some of which helped improve women’s daily lives (allowances for single mothers, free health care, more extended maternity leave, etc.), women in difficulty have found refuge in the institution of the family and marriage (despite the high divorce rate), thus perpetuating the traditional and patriarchal system.

The city of fiancées

Back to Ivanovo and its lonely workers or workers’ daughters: the local economic situation is difficult, as in many other industrial cities in Russia. The men work in the few machine-building factories that survived the transition, but mainly in the food factories that make up the most flourishing sector of Ivanovo, besides textiles.

According to the social pattern deeply rooted in Russia, women who reach their thirties are pushed to get married and start a family. However, the competitive climate among the women of Ivanovo contributes to amplifying the pressure on the marriage. The marriage market of Ivanovo is characterized by a clear imbalance between supply and demand. Faced with the lack of men to marry and their very high needs linked to their dominant position on this market, the women of Ivanovo often dream of uniting their destiny with a foreign man - preferably European - to improve their daily lives. Thus, several strategies can be observed: some women bet on their physical appearance, do not hesitate to spend their savings on cosmetic surgery, and invest in intensive sports. Others, more numerous, choose education to be both independent and cultured - some with the idea that foreign men like educated women, but often also because higher education can help them get by on their own with a career. The most studied subjects are foreign languages, especially English, French, and German. This leads to a somewhat comical situation, where young women are overeducated and ideally educated, while young men, having grown up with the idea that they will not have to fight to get married, do not make any particular effort to stand out. The young women of Ivanovo learn languages in the hope of studying or working abroad and finding love there or finding a foreign husband from their hometown through the many matchmaking companies located in Ivanovo or on the Internet.

It is indeed an essential part of the local economy and life: there are many signs, often in French (Rendez-vous, Amulette, Ideal), which promise to bring lonely souls together thanks to their various services: meetings, speed-dating, parties, and events including games and alcohol to relax the guests. These events sometimes lead to violent scenes, as the men often behave like conquerors. Local matrimonial agencies are usually present on the Internet, allowing foreign men to consult catalogs of future fiancées and do their shopping. Some local sites, such as comme Les femmes russes(.net), were designed exclusively in French and as one-sided dating sites (unlike more traditional dating sites, where women can also “choose” men). It laments the sadness of the women of Ivanovo and their “pitiful” situation from which the French man must come to free them. The site offers more classic tourist advice and displays the ratio of single women in the city. Christophe, a Frenchman satisfied with his experience on the site, says he found the woman who matched his desires: “The woman is a real woman in their house. It is a being of softness, tenderness. She is feminine, modest, kind, loving” (5). This testimony, lost among dozens of others just as enthusiastic, describes the myth of the traditional Russian woman in filigree, supposed to be what the Western woman would no longer be: gentle, beautiful, and submissive. Some men who are not attracted to emancipated and active Western women are looking for “true” femininity in Russia. The women of Ivanovo have understood it well.

Among those who have successfully married abroad, some still report difficulties with integration, especially when the marriage was concluded at a distance and the bride could not familiarize herself with the host country or learn the language beforehand. Ivanovo brides also have to deal with the degrading clichés describing Russian women as gold diggers.

However, in their twenties, the latest generation behaves quite differently from the previous one: these young women who followed (even from a distance) the #metoo wave refuses to enter this market. More than the lack of husbands, they lament the lack of attractive jobs. Nevertheless, the language courses given by the French Institute of Ivanovo have never been so successful.

A brand image enhanced by the city

The city’s administrative services, especially the Registration Office, celebrate wedding anniversaries by organizing parties and offering gifts to the brave couples who exceed ten years of marriage (while the divorce rate in Ivanovo, as in the rest of the country, remains very high, around 50%). Thus, the city of Ivanovo does not seem to have decided to give up its fiancées, which, since the 1990s, remain its “trademark.”

Indeed, the nickname of Ivanovo, the City of Brides (Gorod nevest), was popularized by the song “Why aren’t we a couple?” from the film Honest, Intelligent and Single by Aleksei Korenev released in 1981. Since then, every Russian associated Ivanovo with young women to be married. Thus, every May 28 - the day of the city’s festival - a parade of brides in wedding dresses proudly marches through the streets. The town also organizes its beauty contest and is not ready to give up its tourist attraction. Symbolically, Ivanovo changed its coat of arms in 1996 for the image of a young spinner. Finally, capitalist married Russian society, Gorod Nevest is now a registered trademark... of mayonnaise produced in Ivanovo.

(1) Appearing between the 11th and 14th centuries, the Golden Ring (Zolotoye Koltso) designates a region that gathers a group of ancient princely cities of Holy Russia sheltering architectural and artistic treasures classified as world heritage by UNESCO.

(4) Alcoholism is a leading public health problem in Russia, affecting the country in multiple ways. A government plan restricting the sale of alcohol by increasing the price and banning advertising has decreased consumption by 43% between 2003 and 2016.

* Natacha MARBOT is a student in Master 2 of International Relations at INALCO and an aspiring journalist.