Against the backdrop of the Covid-19 pandemic and the war in Ukraine, Russia has been trying to fuel its anti-Western rhetoric in the former Soviet space for several years. It has used the argument of manufacturing and testing biological weapons within a vast network of laboratories built and financed by the United States. 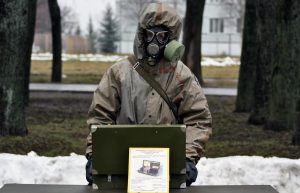 On August 30, 2021, a petition addressed to the Ukrainian President was put online, asking Volodymyr Zelenski to proceed with the immediate closure of the American laboratories present in the country: viruses dangerous to humanity would be manipulated there to create biological weapons. According to information circulating on pro-Russian social networks, other reference laboratories were installed after the end of the USSR by the United States in the entire post-Soviet space. The controversy, which has been growing since the early 2000s despite its air of “fake news,” has gained momentum against the backdrop of the Covid-19 pandemic and the war in Ukraine. Relayed with insistence by the Russian authorities, this information is difficult to verify. It is no less damaging in the post-Soviet countries, in particular, sometimes feeding an anti-Western sentiment.

The West discovered Biopreparat in 1992: a Soviet scientific and industrial program designed for biological warfare; its leading site was located on the island of the Renaissance in Kazakhstan. Created in 1973, it was discovered thanks to the revelations of its former deputy director, Ken Alibek, a defector who had emigrated to the United States. The unit employed about 60,000 people who worked on various pathogens: Ebola, smallpox, typhus, black plague... through 47 “organizations,” ranging from “dual scientific research” centers to manufacturing plants located all over the “belt” of former Soviet republics, especially in the south (Central Asian and South Caucasus republics) and southwest of the USSR (Ukraine, Moldova).

After the fall of the USSR, a dilemma arose about the risk of biological proliferation via both abandoned laboratories and scientists who could disseminate their knowledge in this field. The European Union has mainly invested in the sector of cooperative scientific programs to avoid the dispersion of brains. The United States, on the other hand, launched the Cooperative Threat Reduction program as early as 1991: it is the origin of the network of reference laboratories that depends on the DTRA (Defense Threat Reduction Agency), an agency of the U.S. Department of Defense, whose funds come from the Pentagon. According to some sources, there are more than 200 reference laboratories, a dozen located in Ukraine. This network “surrounds” present-day Russia and corresponds to that of the former Soviet facilities.

Today, Moscow is skilfully seizing the subject to denounce “an encirclement” of Russia by the Pentagon. The authorities talk about the “manufacture of biological weapons” by the Americans; some blogs, to which the media and think tanks refer, even mention “ethnic weapons.” Russia has raised the subject in UN forums, calling for control of these “American” facilities, to which it wishes to have priority access with its teams of scientists. Georgia is at the center of this crystallization due to the presence on its territory of the Richard Lugar Center's laboratory: "The visit of Russian experts to the Richard Lugar Center in Georgia, under mutually acceptable conditions, has not yet been possible. The Georgian side has not yet responded to our request sent in June 2019," the Russian Foreign Ministry said in May 2020.

A weak and not very restrictive international control architecture

The UN Biological Weapons Convention (BWC), which was opened for signature in April 1972 and entered into force on 26 March 1976, is not very binding and is easy to circumvent, at least by the powers that have the scientific know-how and the pathogens. Its article 1 §1 specifies that each State party “never undertakes under any circumstances to develop, produce, stockpile or otherwise acquire or retain microbial or biological agents (...) which are not intended for prophylactic, protective or other peaceful purposes”. The use of the term "prophylactic,” defined as capable of preventing contagion, opens up the possibility of storing strains of biological agents as a basis for vaccine development. The other 15 articles of the Convention only refer to Article 1. Moreover, no binding international control mechanism is included in the Convention due to the lack of joint agreement, especially by the United States. Only Article 6 refers to the possibility of filing a complaint with the UN Security Council if duly justified.

Two main limitations bound the Convention: first, conserving a dangerous biological agent is necessary for scientific research for vaccine treatment and public protection. Therefore, a laboratory holds these pathogens hazardous to scientific purposes, and it is almost impossible to predict their future use, for better or for worse. This fact is denounced under the term "dual research" of reference laboratories since it is impossible to determine the use that will be made of them tomorrow(1). Secondly, the UN Security Council, as a central body, can easily block any complaint filed as long as the accused - whether American or Russian - is permanently seated there. Logically, therefore, Russia promotes absolute respect for the Biological Weapons Convention, aware that it retains the permanent freedom to block any process against it. On the other hand, it is opposed to any proposal - notably from France - to create a binding body that would depend directly on the UN Secretary-General and could therefore bypass the vote of the Security Council.

Russia's assertions feed an information war, while the arguments put forward on specialized blogs are provided: for example, it would be disturbing to note that African swine fever, endemic in the natural environment in sub-Saharan Africa, was identified in the early 2000s for the first time on wild boars and pigs in Central and Eastern Europe (Poland, Baltic countries, Czech Republic, Russia, Belarus, Ukraine, Moldavia) Other diseases are mentioned, such as anthrax or coronaviruses that have caused deaths in Ukraine or Georgia and would have reference laboratories as epicenters. Covid-19 has not escaped the rule: some blogs link the global pandemic declared at the end of 2019 and the exercises organized in the United States by the authorities and private American companies to fight a highly contagious pneumonic pandemic. One example is the Crimson contagion exercise (January-August 2019) conducted by the US Department of Health, simulating a respiratory virus spreading worldwide.

These hardly verifiable accusations suggest the possibility of hybrid warfare. To paraphrase James Broughton, the limits in this area are those of our imagination, contrary to what was thought when the BTWC Convention was drafted in the 1970s: “International control (...) was not considered indispensable since the use of these weapons does not bring immediate military advantages.”(2) Yet the indirect attack on an adversary's economic and demographic bases without the latter being able to determine either the origin or the date would be a considerable advantage, close to Sun Tzu's thought, evoking the challenge of winning a war without having to fight it.

Biological control is an asset overall: the United States, thanks to university research laboratories, has been able to conduct studies on forms of coronavirus since the 2000s. This would explain their capacity to react and design vaccines against Covid-19.

Finally, this field has integrated a new significant global player, namely China. In April 2021, a Sino-Kazakhstanese laboratory obtained its accreditation in Kazakhstan, specialized in contagious animal diseases (study and diagnosis), and was classified BSL-2 (biosafety level 2, out of 4 levels). This does not prevent China from sometimes taking up the rhetoric of an American biological threat.

After a few weeks of the war, Russia has been agitating a biological threat linked to the presence on the Ukrainian territory of laboratories financed by Washington and could attack the Russian army. The Western chancelleries have interpreted this warning as a risk of Russia using this biological weapon under a false flag. This ongoing episode perfectly illustrates the nature of this informational war that thoroughly fuels the East-West ideological confrontation. A reflection on the hybrid possibilities of this war cannot be overlooked in the current war and health contexts.

Thumbnail: Soldier of the Chemical, Biological, Radiological and Nuclear Company of the 4th Tank Division of the Kantemirovskaya Guard  (photo Wikimedia Commons/Vitaly Kuzmin).

* Trainee of the Higher Military Scientific and Technical Education.