The Shanghai Cooperation Organization (SCO), a diplomatic asset for Russia, is not an alliance that acts as a monolithic, anti-Western geopolitical bloc. For example, it does not prevent the reconfiguration of specific power relations at Russia's expense. This is particularly the case in Central Asia. On the contrary, it sometimes facilitates Russia's decline to benefit other Eurasian powers. 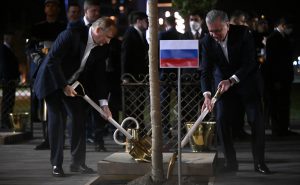 At the 22nd Shanghai Cooperation Organization (SCO) leaders’ summit in Samarkand on 15-16 September 2022, Russia displayed its leading role in the world’s largest regional organization(1), proving that it is impossible to isolate this Eurasian power. Against the affirmation of Sino-Russian strategic proximity, the summit served as a megaphone for the Russian President’s tirade against the Western attempt to impose a unipolar order. While the themes of multipolarity and sovereignty resonate with all SCO members, concrete support for Russian aggression has yet to materialize.

The apparent unity of the SCO

Since its creation, the SCO has offered Russia a central diplomatic platform. The convergence of its nine member states (they represent 25% of the world’s GDP and 50% of the population), notably around the notion of multipolarity, was, from the outset, a response to NATO’s enlargements in the 2000s. However, it is not a counterpart to NATO. The SCO is indeed more diversified in its actions, ensuring, in particular, infrastructure projects. In contrast, security cooperation is limited by the principle of non-intervention. It is also devoted to the fight against terrorism, separatism, and extremism. Within this framework, for example, Russia and China can conduct joint military exercises, as in September 2021, in southern Russia, near the Kazakh border. However, the SCO cannot be said to be unwavering in its support for Russia, as it has been the case since 24 February and Russia's invasion of Ukraine. Since then, China has not supplied arms to its Russian partner and “respects the international sanctions against Russia”(2). Iran, a country affected by Western sanctions and engaged in a logic of confrontation with the West, is the only member of the SCO suspected of having supplied arms - in this case, drones - to Russia after 24 February.

On the contrary, the war in Ukraine is testing the benevolent attitude of member states toward Russia. While none of them voted in favor of the UN General Assembly resolutions denouncing Russia’s actions in Ukraine since the start of the war, the annexation of four Ukrainian regions, decreed on 30 September 2022, has not been recognized by any of them. China, in particular, fears that Ukraine could set a precedent for independence claims on its territory. In India, Prime Minister Narendra Modi openly condemned Russia’s action in a one-on-one meeting with President Putin on 16 September, saying that “this is not the time for war.” Despite a partnership around armaments(3) and energy, Happymon Jacob, associate professor at Jawaharlal Nehru University, sees in the Indian attitude the beginnings of a slow split with Russia.

This malaise linked to the war in Ukraine is one of many to undermine the geopolitical coherence of the SCO. In particular, the tensions between China and India have not gone away: Beijing cautiously welcomed its competitor’s membership in 2016. Tensions and conflicts between India and Pakistan or Tajikistan and Kyrgyzstan also remain. As for the anti-Western character of the SCO, this too has been undermined: it is not in India’s interest, in particular, to turn the SCO into a contesting platform; on the contrary, since 2020, Delhi has been actively seeking partnerships with the West(4). The possible accession of Turkey, a NATO member, and mediator between Ukraine and Russia, would probably further dilute the anti-Western nature of the SCO. The contingent nature of Moscow’s claim to support the SCO is also confirmed by the Central Asian countries’ commitment to excluding bloc approaches and pursuing multi-track policies. Indeed, the presidents of Kazakhstan and Uzbekistan reminded the SCO summit that “the authority and popularity of the SCO is because it does not enter into a logic of blocs and confrontation”(5).

Russia weakened in its zone of influence within the SCO

Moreover, Russia is having difficulty fulfilling its role as the leading regional provider of stability and military support, a position enshrined in the Collective Security Treaty Organisation (CSTO)(6). This military alliance is struggling to fulfill its fundamental objectives. While the CSTO was mobilized in January 2022 to help restore internal order in Kazakhstan, it failed to do so in September when Yerevan called on it after Azerbaijan’s aggression on its territory. Since then, there have been increasing demonstrations in Yerevan, demanding Armenia’s withdrawal from the CSTO. After a visit by US House Speaker Nancy Pelosi to Yerevan in September 2022, the Americans played a decisive role in securing a ceasefire(7). On the other hand, the Russian President’s mediation of the Armenia-Azerbaijan summit on 31 October in Sochi came only belatedly, leading to a renunciation of the use of force by the belligerents but without any real progress towards normalization. The same logic now seems to prevail in Central Asia where, on the eve of the SCO summit in September, new violence on the border between Kyrgyzstan and Tajikistan left 100 dead and 100,000 evacuated without prompting intervention by the CSTO.

Russia's failures in Ukraine raise doubts about Moscow’s ability to conduct an operation in support of its allies, as in January in Kazakhstan. This weakening of Russian positions is illustrated by the shifts in the posture of the Central Asian countries, all of which have refused to recognize the Russian annexations in Ukraine, albeit without ever condemning Russia. Kazakhstan has made it clear that it is reluctant to help Russia circumvent Western sanctions(8) and that CSTO intervention in Ukraine is not an option. Uzbekistan, where a significant proportion of the population works in Russia, has banned all military recruitment of its citizens by Russia. There is less protest from Kyrgyzstan and Tajikistan, where Russian military bases are located.

Traditionally good Russian relations with Central Asian societies are also deteriorating. The immediate causes are Russia’s disproportionate mobilization of ethnic minorities for its war in Ukraine and the rising cost of living in Central Asia due to the migration of many Russians fleeing mobilization. This movement feeds the post-colonial apprehension of the relationship with Russia(9). The economic dependence of these countries on Russia is becoming troublesome: all of them are suffering from the contraction of the financial transfers traditionally made by the Central Asian diasporas settled in Russia. Faced with the combined risks of economic sanctions against it and the contagion of the conflict on its territory, Kazakhstan is questioning its relevance within the Eurasian Economic Union (EAEU)(10). At the same time, Uzbekistan seems to be redirecting its commercial and diplomatic efforts toward Azerbaijan, Turkey, and Europe.

The SCO as a cover for and facilitator of Russian decline

For several years, the SCO has been a means for Central Asia to open up and play the great powers off against each other. The weakening and radicalization of Russia are inviting Central Asians to distance themselves from Moscow. It is an opportunity for the other SCO players, especially China.

The latter is in a strong position, working to increase its influence in Central Asia within and beyond the SCO framework. After the stoppage of the Covid-19 pandemic, its commercial weight in Central Asia continues to grow(11). The signing of a contract with Kyrgyzstan and Uzbekistan in the spring provides for the creation of the shortest land link between China and Europe, bypassing the territory of Russia, which has proved incapable of obstructing this project. China, while actively participating in security cooperation within the SCO, is at the same time breaking free from this framework by opening outposts, selling or bartering its technologies, and conducting joint military training(12). The division of roles in the region - Russian military pre-eminence and Chinese economic influence - seems to be gradually eroding.

But China is not alone in increasing its influence in Central Asia. With its future access to the SCO, Turkey could assert its role as a hinge between the West and Asia. It would complement its bilateral efforts and the geographically limited influence of the Organisation of Turkic States(13). Moreover, with an aggressive Russia and an increasingly influential China, the economic ambitions of other SCO members (Iran, India, etc.) are viewed positively by the Central Asian countries. However, the latter seems receptive to the EU’s proposals, which could counterbalance the idea of a region ready to surrender to the anti-Western sirens of the SCO and some of its members.

The variable-geometry approach of the SCO member states to Russia’s overtly aggressive policy towards the West has its member countries oscillating between disapproval and complacency. Successes on the battlefield could have stifled any discontent; instead, Russian setbacks have only strengthened member states’ distancing, as evidenced by the recent G20 summit in Bali (14-16 November 2022).

(3) Russia has been India’s largest arms supplier over the past decade. Still, the share of Russian weapons in India's arsenal has almost halved between 2012 and 2021, according to the Stockholm International Peace Research Institute (SIPRI). India has not followed the West in the sanctions field against Russia. It could be a helpful partner in supporting the Russian military industry because of its familiarity with Russian equipment. To date, India has not done so.

Thumbnail: On the sidelines of the SCO summit in Samarkand (September 2022), the Russian and Uzbek presidents plant a tree (source: website of the Russian presidency).

* Benjamin HARDING is a student of International Relations and the Russian language, specializing in the post-Soviet space. He would like to thank Pierre Chabal, director of LexFEIM, for his clarifications and advice during the writing of this article.