With tensions between the United States and Russia now seemingly more acute than during the Cold War and Moscow ostensibly displaying its rapprochement with Beijing, could the conflict over Taiwan become the trigger for open warfare between Washington and Moscow? 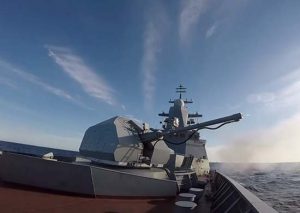 The potential for Chinese armed aggression against Taiwan has been the subject of much speculation since the region’s militarization and the repeated violation of Taiwan’s airspace by Chinese military aircraft. If the respective roles of the Chinese and American powers seem predictable in the event of armed conflict, what about that of Russia? Often portrayed as China’s de facto ally, would Russia want to get involved in a Taiwanese conflict?

Taiwan - a frozen conflict, a remnant of the Cold War

In 1912, after the fall of the Qing dynasty, a new government led by the Chinese Nationalist Party (Guomindang) was established and created the Republic of China, ending more than two thousand years of empire. The continuity of this government was to be short-lived. In 1927, the country entered a civil war and was divided between the forces of the Nationalist Party and those of the Chinese Communist Party. If a truce was signed during the Japanese invasion to fight the common enemy, the war resumed as soon as the departure of the Japanese troops was confirmed. This conflict ended with the victory of the Chinese Communist Party, which founded the People’s Republic of China in 1949, forcing the troops and the nationalist partisans to flee from mainland China to take refuge on the former island of Formosa.

Amid the Cold War, the United States could not accept a Communist victory and therefore came to the aid of the Chinese nationalists to ensure the protection of the island and the subsistence of the Republic of China. China became one of the many divided nations in the Cold War. The Chinese Communist Party will never renounce the reunification of mainland China with the island of Taiwan, which Beijing still considers an integral part of its territory. For its part, Taiwan, after decades of unofficial independence, has become an exemplary democracy and has seen the development of a true national feeling on its territory. From now on, its youth no longer feel Chinese but Taiwanese.

As an undisputed world power, China is increasingly asserting what it considers to be its national interests. This is true of the China Sea and Taiwan. And it is because it now has the means to do so that Beijing can afford to exert a real threat on the island of Taiwan, despite the continued presence of American armed forces.

What is the nature of the Sino-Russian alliance?

The rapprochement between Beijing and Moscow, often mentioned in recent years, is undeniable. The two countries have deepened their cooperation at all economic and military levels.

Paul Dibb(1), a professor at the Australian National University’s Centre for Strategic and Defence Studies, has outlined the Sino-Russian similarities that explain the existence of such a partnership in four points: first, both China and Russia have memories of a period of national humiliation, when the West took advantage of the country’s weakness to establish its dominance. For China, the reference is to the period from 1839 to 1945, with the opium wars, the establishment of foreign concessions, and the Japanese invasion; for Russia, the memory goes back to the conflicts between the 18th and 20th centuries when the country was pitted against France, Sweden, and Germany. In the course of their modern history, both countries also feel that they have suffered territorial losses at the hands of the West. Second, Dibb explains that it is common for continental powers to seek to establish a sphere of influence in their immediate vicinity to protect their borders, which explains the extreme reluctance of both China and Russia when the West involves itself in the politics of their neighbors or their domestic politics. Third, both states use the theme of reunification with lost territories to distract their populations from some internal issues and to assert a strong national sentiment. Finally, both Russia and China see the demonstration of military strength as an effective strategy to display their power. This is reflected in the militarization of areas like the China Sea, Crimea, and even Belarus.

However, as Russian researcher Alexander Lukin(2) reminds us, the depth of Sino-Russian friendship must be qualified: Moscow is perfectly aware of Russia’s weak position vis-à-vis China. Moscow does not trust Beijing completely and remains concerned about China’s very assertive attitude. Many Russians see China as a potential security threat. Tensions are emerging in Central Asia, an area considered to be Russia’s preserve, where China is nevertheless extending its influence, which is no longer strictly economic. Moreover, Beijing takes a dim view of Moscow’s ambition to integrate Mongolia into its collective defense and security system(3).

Despite these points of divergence, it must be noted that we are now witnessing growing Sino-Russian cooperation. In particular, China and Russia have established military alliances, for example, by joint exercises in the China Sea and the Baltic Sea. Russia is now supplying China with much advanced military equipment, such as submarines and missiles. This military cooperation is accompanied by knowledge transfers from Russia to China and mutual assistance, particularly artificial intelligence technologies.

This alliance is rooted in the shared ambitions of Beijing and Moscow to confront the West on the international stage. Both Xi Jinping and Vladimir Putin consider that the world remains dominated by a declining West occupied by national tensions. V. Putin has never held back in describing the European Union as weak, divided, and at the mercy of the United States. A similar perception of this hostile environment is conducive to the assertion of Russian and Chinese powers that oppose the current international system. In a realistic approach to international relations, China and Russia assert their military power to secure their interests. Therefore, their military partnership is to be taken seriously, constituting a tangible threat to the values defended by the Western world. The Sino-Russian partnership, which will be strengthened according to its protagonists, is also intended to be demonstrative if we believe certain official statements. For example, after a visit to Moscow in 2018, Chinese Defense Minister Wei Fenghe declared that he wanted to show the United States the close ties China has with the Russian military(4).

For Dibb, however, it would be a mistake to imagine a Sino-Russian military alliance that would deepen to the point of creating a kind of “NATO bis,” with a solidarity clause equivalent to Article 5 of the North Atlantic Treaty, which provides that an “armed attack against one or more [parties] ... will be considered as an attack against all parties”.

The Taiwanese conflict as a pretext for Russia?

It, therefore, seems implausible that Russia could intervene alongside China in the Taiwanese conflict. During a press conference on October 13, 2021, V. Putin maintained that “Xi Jinping did not intend to use the armed forces to resolve any conflict and that the Chinese philosophy of the sovereign state and state management does not include the use of force” (5). The Russian President thus rules out any possibility of opening a conflict with Taiwan. This statement can be interpreted as reflecting Russia’s lack of interest in the Taiwan question. Participating in a war alongside China would not be very strategic for Russia: not only would it be heavily criticized on the international scene, but its participation would not bring it any real advantage. On the contrary, not getting involved in the conflict would avoid any international denunciation while at the same time not calling into question its partnership and ideological support for China.

If this lack of Russian interest in Taiwan a priori removes the risk of a Russian intervention alongside China in the region, this restraint does not remove all threats. Indeed, Washington does not hide that it can no longer wage more than one war at a time against significant powers. Therefore, the United States would be unable to enter into conflict simultaneously with China (if it attacked Taiwan, for example) and Russia. Researcher P. Dibb, therefore, fears that through the Sino-Russian military partnership, China and Russia will synchronize their respective agendas to trigger two separate but simultaneous conflicts, for example, in Taiwan for China and Eastern Europe for Russia. Russia should fear a possible involvement in the Taiwanese conflict, but Moscow will take advantage of an open conflict in Taiwan to push its agenda.

(4) Chauman, “中俄抱团取暖抵御美国压力” (China and Russia warm up by banding together to resist US pressure), RFI, April 5, 2018.

(5) Vladimir Putin during Hadley Gamble’s interview for CNBC at the Energy Week conference in Moscow, October 13, 2021.

Thumbnail: Sino-Russian joint military exercise “Joint Sea-2021”, which took place from 14 to October 17, 2021 off the Peter the Great Gulf coast in the Sea of Japan (Copyright: Russian Ministry of Defense).

* Clara HERB is a second-year student in the International Relations Master’s program at Inalco (Paris).