Most of the cities located next to a coast line are well known for their waterfront. The most relevant and attractive symbols of the city, the concentration of urban life, the reasons of their prosperity may be marked on this tiny stripe of land. Not in Tallinn, however, allegedly due to the remains of the exclusive military and industrial uses the shore had in Soviet times.

The waterfront of Tallinn extends on about 46 km and the core of the city itself is located approximately in its central-east section. Industrial activities dominate along the core within the international tourist and Ro-Ro harbor, which is still the crucial infrastructure for Tallinn’s successful economical activities. Towards the east or west side one finds some sand beaches characterized by a very shallow coast (resulting from the continuous rising of the land). But those near the city center still suffer from low-quality environment, except for the quite famous Pirita beach (an Olympic site for “Moscow 1980”), located on the east border and Stroomi beach, further west.

During the Soviet occupation most of the coast next to the city center was militarized and used to grow a new industry: military facilities and harbors were located there[1]. The railway ring, destroyed during World War II and replaced with German gauge during Nazi occupation, was completed to dedicate a track for industrial activities. Already present in the Tallinn city map of the 1950s, the railway is still here today, if not as a steel structure, at least as a wasteland path, thus maintaining the gap between city and shore. 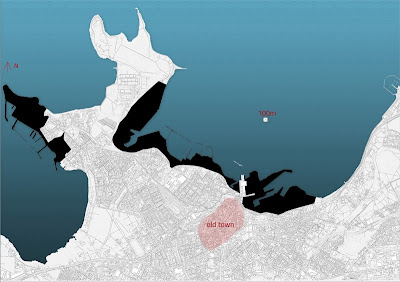 Accessibility of the shore line in the central area of Tallinn in 1990 (© Damiano Cerrone, 2010 / sources: different historical maps)

Urban planning in the post-Soviet times

Along with the dissolution of USSR in 1991 a new urban planning system came into being. The independence process meant to change the all-Soviet and republican centralized planning into more market-based mechanisms. “The reform of urban planning, however, has been a difficult and controversial task. Market euphoria and the consequent support for a sharp reduction in public administration[…] had been defeated, eroding the legitimacy of planning."[2] This has been seen as a great opportunity for private developers to guide the city planning process by themselves.

The first master plan for Tallinn “Üldplaneering” (understood as maps at a 1:45000 scale) was approved only in 2001. It just marked outlines for each city district, whereas the Tallinn planning office started elaborating district-focused plans only in the year 2011. Although the 2001 master plan and the district-focused plans are supposed to provide a framework for design developers, their strictness is challenged by the fact that modifications can easily be done while proposing detail plans. Up until now, the district-focused plans followed the developers’ proposals. An important example of soft policy regarding urban design is the so-called Casino Island, (renamed into Culture Island after the project to build casinos there was abandoned) projected on a shallow part of the sea in Paljassaare, a 3km long peninsula located on the north-west of the city center. The artificial island was already released in 2008 on a draft picture on public media[3], but appeared on the first district-focused plan of Northern Tallinn City District only in October 2011. This might confirm that city planning comes together with the private initiative or even afterwards. Public space projects are actually often outsourced of the Tallinn planning office, as in the case of the Sea Promenade (“rannapromenaad”)[4], the design of which was entrusted to a private architecture studio. In the current context, this may raise questions about the legitimacy of the private sector to be either the speculative developer, or the city-committed urban designer, as well as about the monopole of the urban design.

Therefore in the last ten years, detail plans have become the wheel of change and it is important to understand them as the trigger mechanism for any future development. The process of their approval can be resumed in that way: developer expresses his intention to design a detail plan, the city government then forwards the guidelines for this design and communicates the intentions of the developer to the locals. When the detail plan is drawn, the city government analyzes it and sends it back with notes and critiques so that developers can work out an amended second draft which this time is made public. Unless strong arguments emerge from the public, the plan is fully approved, otherwise the paper is sent back again for corrections.

Various actors can initiate such projects: a foreign developer acquiring a huge slice of land for housing projects; industrial companies merging their lands together to create a new urban center (50 ha in Paljassaare); a developer launching a design contest for a residential development of 6000 inhabitants (Ecobay in the year 2008, on the west coast of Paljassaare); but it can also be a small landlord willing to build a new apartment building or to renovate an old one. Alternatively, many “ghost plans“ can be drawn not in order to be built, but rather to rise the land value, as an acute observation of local practices revealed.

Even though the heritage protection institutions are locking out some limestone buildings spread all over the coast, such as the Navy old dance hall, the high costs of renovation justified the demolition of several other buildings left out of the protection list. Sometimes these places are turned into privately-managed “temporary” parking lots so that landlords can accumulate a capital to realize a detail plan. EuroPark thus takes, as of June 2011, more than sixty spots in the city, covering a total of about 13 hectares of city land; one of the biggest such car parks (on stand-by to realize detail plan) is located on waste land between the harbor and the central business district.

The current situation on the shore line

Nowadays it is impossible to walk along the shore line from east to west. Around the city center we find several closed privatized areas, an extensive line of former industrial buildings, docks, concrete platforms, oil tanks, open air goods storage and warehouses, which alternate with some small sand shores, wasteland, private and state-owned abandoned lands. This situation is called in Tallinn the “left over of the Soviets”, although it actually results from an incapacity to imagine the shore any other way. There is no need to remove the industrial assets just for the sake of doing so; however there is a clear demand for expanding the city toward the sea, the wish of the citizens being to remove the last boundary left, to gain an easy access to the seaside and have the minimal infrastructure in order to use it.

The city of Tallinn first voiced out the “Opening the city to the seaside” slogan in November 2007, as a concept for regenerating the area along the shore. It is quite often used by policy-makers and experts alike, in an attempt to describe the actual process of dismantling industry and expanding the city toward the empty yards on the coast. Several comprehensive visions and city-scale ideas have been released but the neo-liberal governance grants the lead of the process to developers who use detailed, plot-by-plot planning. The city government can actually draft plans but it owns only about 16% of the whole administrative territory of the city and 1-2% of the developing land, mainly around Linnahall[5].

Various influential activists groups are interested in the seaside: NGOs such as Linnalabor (city laboratory) and locals’ associations such as Telliskivi Selts[6] are slowly bringing people to use the shore , through initiatives and workshops. They are also the ones making it possible to shape a strong public opinion regarding disputable detailed plans.

With the realization of the “Culture Mile” (Tallinn European Capital of Culture for 2011) –a quickly and roughly made promenade across the west seaside from Linnahall till Tööstuse street, near the military harbor– something started to change. The pathway follows the old rail so that people, now and for the first time, can actually start to re-appropriate the coast by walking all along it. The promenade is used mainly for jogging, biking and leisure walking, but it is also a useful pedestrian shortcut. According to the city enforced master plan, a new road will actually run parallel to this path all along the sea in order to reconnect the developments to come in the next years. However, it might actually re-enforce the “old border” between city and shore.

In Tallinn we have a city master plan which is not very strict, is drawn in a very small scale, whereas district plans are in the making and builders can negotiate at the same time and make variants on their plot. But how will the city look like within 15 years?

My idea was to collect all the main detail plans already approved and those in approbation phase (November 2010), and to visualize them as if they will all be built. To search for those drawings I simply used the “Tallina planeeringute register” (online Tallinn plans archive) a database from which one can get all the documents related with any detailed plan presented or approved. In superimposing the plans on the base map of Tallinn I was able to create the scenario map of the waterfront. 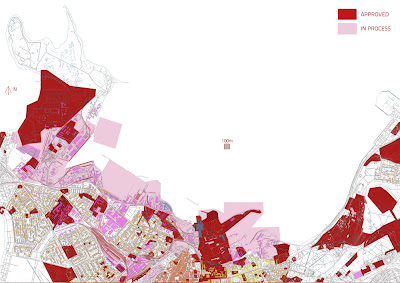 This pictures reflect the missed opportunities for the City of Tallinn to acquire back portions of land or at least to be the partner of some major projects to splinter the private chain of housing and public space design on the shore line. This massive expansion of the city, with the consequent population growth (90000 in the north-west part by adding the calculations of the projects), lacks an overall plan as well as clear strategies to make sure that once everything is build the shore wouldn’t turn into a dormitory district. Actually, the very shore line and parks seem to be mostly out of the process, no green corridors passing through the new developments are visible, while the main parks of the city are located at the east and west ends of the city. Actually, a green area of Tivoli leisure park, located directly on the shore a few step east of the main harbor, will make place to a housing project, while a new highway should run on the very shore line.

Each one of those projects wants to be attractive and some major ones are even designed to be new centers as Paljassaare. This project will mostly reflects the moto of opening the city to the seaside with the realization of a massive promenade around new mixed-use developments, with shops and leisure activities, housing, mall, a sailing harbor and the culture island. Indeed this development shows how a bigger scale project may give more opportunities for “better” design but this is not happening in the city center.

* Student and research assistant at the Estonian Academy of arts