Since the 2020 conflict, Armenia seems to have difficulty adapting to its Azerbaijani rival’s rapidly evolving armed forces. Limited by its financial means and particular diplomatic situation, it struggles to demonstrate the credibility of its defense system, both politically and on the ground. 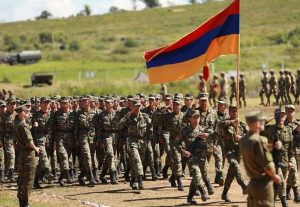 The potential weakness of the Armenian army is essential in the face of a conquering Azerbaijan, strengthened by its victories and determined to assert what it considers to be its legitimate international right by all the means at its disposal.

During the autumn of 2022, the war between Armenia and Azerbaijan saw a resurgence of tensions and deadly clashes. The regime of Ilham Aliyev launched the first incursion in May 2021; a second, even larger one was decided on 13 September 2022 on several Armenian localities in uncontested areas near the border. This second military operation resulted in the death of 207 Armenian civilians and the displacement of 8,000 people. Significantly, this attack was not on the Nagorno-Karabakh region but on Armenian territory for the first time.

These events are a continuation of the confrontation of autumn 2020. The ‘44-day conflict’ and the resulting defeat were real trauma for Armenia. Beyond the terrible losses (at least 400 young Armenian soldiers, the equivalent of an age group for the country), the army's prestige as a fundamental institution was seriously damaged.

This war constituted a real ‘strategic surprise,’ from which Armenia seems to be struggling to learn the lessons, both geopolitically and militarily. It brutally reversed the balance of power established between Armenia and Azerbaijan by the first conflict at the end of which, in 1994, Armenia had taken control of Nagorno-Karabakh and 7 Azerbaijani districts. These districts returned to Azerbaijani control following the Russian-brokered cessation of hostilities agreement of 10 November 2020.

Since the numerous dysfunctions observed within the armed forces were brought to light, there has been much talk of an in-depth reorganization of the Armenian defense apparatus. The main shortcoming observed concerns the command organization, where the General Staff and the Ministry of Defense gave contradictory orders. In addition to this challenging process, there was a severe problem of leadership: since the defeat of autumn 2020, no less than four Ministers of Defense have succeeded one another: David Tonoyan (relieved on 20 November 2020), Vagharshak Harutiunyan (replaced on 3 August 2021), Arshak Karapetyan (dismissed and replaced on 15 November 2021) and finally Souren Papikyan. A consensus has thus emerged on the absolute necessity of an in-depth reorganization of the armed forces. A redistribution of attributions is underway within the Ministry, the reform having notably elevated the Chief of the General Staff to the First Deputy Minister of Defense position. In February 2022, the Chief of the General Staff Artak Davtyan and four high-level general officers were imprisoned on corruption charges in connection with arms procurement contracts. It was agreed that the officers would be excluded from any arms and equipment contract dealings. The General Staff is now responsible for planning, and the Minister of Defense is the head of the armed forces.

The National Security Advisor, Armen Grigorian, has since indicated that it was time to place the defense tool “under the government's responsibility.” This political takeover of the military domain is an essential objective. In this respect, the new Defense Minister Papykian's profile is eloquent. It contrasts with that of his predecessors: a professor of history, young (36 years old), and part of the close circle of Prime Minister Nikol Pachinian, he is the first non-military Defense Minister who was not trained in Russian military schools. He has a huge task ahead of him. He intends to make rapid progress on significant reforms, with three main issues: the establishment of a system of professionalization, the gradual replacement of the armed forces deployed at the border by specifically trained border guards, and better integration between the Ministry of Defense and the General Staff. The professionalization of the armed forces is a crucial issue because the tactical system and equipment of the Armenian troops, which are entirely based on the Russian model, seem to have difficulty adapting to the rapid and practical evolution of the Azerbaijani forces.

Coping with the modernization of Azerbaijani techniques and equipment

The Armenian defense system is still completely modeled on the Soviet model. Its forces are still based on conscription. Its equipment is aging, almost entirely of Russian origin. The country has only one professional brigade, the “Ministry of Defense Peacekeeping Forces Brigade,” under joint Russian-Armenian command. It is the only unit with operational experience, training with international partners, and participation in external operations.

By 2020, the Azerbaijani offensive had overwhelmed Armenia’s dense ground-to-air defenses (GAD) - including Russian S-300 systems. The failure to consider the new threat of ‘drones’ and ‘remotely operated munitions’ had devastating consequences. The much-publicized use of the notorious Turkish Bayraktar drones (whose operators were probably also Turkish, as some reports have pointed out) contributed significantly to the outcome of the fighting. Existing casualty counts from the recent 2022 confrontations show that these Bayraktar drones again carried out most of the destructive strikes. Thus, the solution to this type of threat has not yet been found. In this area, the Russian setbacks in Ukraine are likely to draw Armenia's attention and raise questions about the relevance of its military model.

The tactical doctrine does not seem to have evolved much in the last two years either: the armed forces still rely heavily on a static defense system, buried defense lines, with effective use of ancient towed artillery. Armenia is trying to diversify its arms purchases (a $155 million contract with India is being considered). Still, it is most often blocked by its diplomatic position and proximity to Moscow.

Meanwhile, the economic imbalance with Azerbaijan continues to grow, which is reflected in the comparison of the two countries military capabilities. Baku continues to purchase the latest weapons - including drones - from Israel and Turkey. Its armed forces are also adopting the procedures of the Turkish army, thus aligning with a NATO format.

Very isolated, Armenia is looking for allies. As a member of the Collective Security Treaty Organisation (CSTO), a military alliance dominated by Moscow, it belongs to the “Russian bloc.” Nevertheless, Russia does not want to take a stand against Azerbaijan, which has close relations with Turkey. Although Armenia did call on the CSTO during the 13 September offensive on its territory, this legitimate call was not followed by results. The CSTO’s inaction in this area contrasts with the highly publicized peacekeeping operation launched in Kazakhstan in January 2021 to end internal unrest that was far less in keeping with the Organisation’s missions.

Armenian politicians are thus becoming aware of the limits of Russia’s “support,” its role as protector, and its political interests. Nikol Pachinian has already pointed the finger at the inaction of the Russian peacekeeping forces in Nagorno-Karabakh. The ceasefire agreement signed on 9 November 2020 has established Russia’s role as the ultimate arbiter of the conflict by installing a Russian peacekeeping force of nearly 2,000 peacekeepers (mainly from the 15th Special Motorised Infantry Brigade of Samara) in Nagorno-Karabakh. Charged with guaranteeing the respect of the cease-fire by the parties, the latter has been strongly criticized for its shortcomings and lack of reaction to the various incidents. However, Armenia's almost forced proximity to Russia hinders Yerevan’s ability to establish partnerships with other countries.

Conversely, Azerbaijan has close relations with Pakistan, most former Soviet republics, Hungary, Israel, and Turkey, its closest ally. Baku can also rely on its significant energy resources to establish strategic supply contracts with influential players, including the European Union, particularly in need of diversifying supplies created by the war in Ukraine.

While the Minsk Group (co-chaired by the United States, France, and Russia), which is strongly contested - notably by Baku - is entirely at a standstill in its mediation role, the European Union seems to have to play a more critical role in the peace negotiations. Progress in this direction is regularly noted, notably with the establishment in October 2022 of an Armenian-Azerbaijani border demarcation commission. However, Armenia’s position remains particularly fragile, and its difficulties in the defense field appear to be an aggravating factor in ensuring its credibility.

Thumbnail: Source - Facebook page of the Armenian Ministry of Defense.

* Julien G. is a chief of a squadron.