The gap is widening between a Russian power that is essentially turned towards the past and incapable of proposing a vision for the future and youth that aspires to a change at the head of the State. 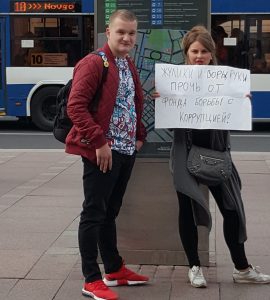 The search of the DOXA student newspaper on April 14, 2021, accused of inciting minors to demonstrate against the authorities, has provoked disapproval from the liberal movement and international mobilization in academic circles. After the protest movement at the beginning of the year, many young people participated. This new case illustrates the problematic relationship between the authorities and their youth, whose mental universe and values are different from the generations that experienced the Soviet regime. The increasing repression of civil society, particularly young people, and the lack of political prospects lead some to consider leaving their country.

A Russian society crossed by a generational divide

Despite the current climate of tension between Moscow and Washington, 65% of Russians aged 18-24 and 51% of those aged 25-39 have a good image of the United States; conversely, 55% of those aged 55 or older say they have a negative opinion of the country, according to a Levada Center poll conducted in early April. Those with a reasonable idea of the United States use social networks (59%) and are particularly numerous (72%) among Telegram users. Reactions to President Biden`s remarks about his Russian counterpart also highlight this generational divide: the term “killer” shocked 52% of people over 55 and left 50% of 18-24-year-olds and 49% of 25-39-year-olds indifferent. For sociologist Grigory Yudin, the mental universe of the 55+ generation was formed during the Cold War and the 1980s, marked by the war in Afghanistan, the Chernobyl disaster, the disappearance of the USSR, and the importance of consumerism. At the same time, their descendants are less sensitive to the confrontation with the West and the hostility of the foreigner For the older generations, satisfied that “time has stopped,” V. Putin is the incarnation of the Kathekon, who protects the world against chaos and the return of the 1990s, explains G. Yudin.

A part of Russian society is tired of V. Putin and his regime and is looking for an alternative. Grigory Yudin analyzes an observation shared by Dennis Volkov, deputy director of the Levada Center. But the President’s decline in popularity is not accompanied by an increase in the audience of the other politicians who make up the political offer today. Part of the responsibility lies with the opposition, which has traditionally been unable to unite and show solidarity, explains this expert. Nevertheless, in the 2-3 years since this erosion of public support has been taking place, calls for the authorities to address the issues that are deemed necessary have become more insistent. The civil society is trying to organize itself, and this emotional concern the young people of the metropolises. Without exaggerating the conflict between generations, a cleavage exists, the older ones being sensitive to the discourse held by the regime, which presents the demonstrations as the work of a "provocative" Navalny, seeking to bring underage teenagers into the street and to oppose them to their parents. However, sociologists such as A. Arkhipova and A. Zakharov show that relatively young people aged 25-35 took part in the January-February 2021 demonstrations. The attitude towards Navalny is also a question of generations, observes Andrei Kolesnikov: 36% of young people approve of his action, and 34% see his poisoning as an attempt to remove a political opponent (9% of those over 55).

A regime that shows its incomprehension and hostility towards young people

The Carnegie expert highlights the change that has taken place since 2018 among young people who have only known the Putin era and were, until then, characterized by their great conformism. Last February, almost half of those surveyed said they favored Putin remaining in power after 2024; this percentage reached only 31% among 18-24-year-olds, and 57% were against it. Surveys conducted in recent years also show that the values held by young people reflect an aspiration to respect and equality and a concern for environmental protection. They have a cosmopolitan vision and an openness to the world that should not be equated with a pro-Western attitude, says G. Loudine. The new generations are more tolerant of sexual minorities; they are more inclined to engage in voluntary and economic activities have a more positive relationship with the West, adds A. Kolesnikov adds. Rebuilding an empire does not appeal to them, according to Alexei Makarkin, just as young people have a more distant relationship to the Great Patriotic War that made the Soviet Union a great power. Suppose the new generations maintain their convictions about the state and society and do not slip into conservatism. In that case, the current authoritarian political system will be put to a severe test by this conflict of values, predicts A. Kolesnikov.

Indeed, “all the rhetoric of V. Putin is oriented to the past,” says Tatyana Felgenhauer, “the head of state has nothing to offer to young people except his obsolete and reactionary view of the world.” Fyodor Krasheninnikov also believes that the methods used by the government towards young people are not likely to restore trust or even to keep their attention. V. Putin's attempts to address young people inevitably give “the image of an archaic man, at ease with the people of his generation.” The Russian President does not use the Internet or smartphones, but this does not prevent him, notes T. Felgenhauer, from making regular visits to his country. Felgenhauer notes that this does not prevent him from making periodic statements that make people uneasy. They are marked by a desire to control the Internet like he already owns the traditional media. For 2-3 years, we have seen an explosion in the growth of social networks (Youtube, Instagram, TikTok), an alternative to state-controlled TV, notes D. Volkov. This phenomenon is explained in particular by the arrival of professional journalists who have made these new media more attractive. It contributes to accentuating the cleavage between the two audiences, young people (Internet) and older people (TV). From the Kremlin's point of view, explains F. Kracheninnikov, a subculture, even a sect, is developing on the Web, which attracts young people to a whole series of harmful activities: opposition to power, hostility to the family, prostitution, and pornography. V. Putin keeps repeating, "Internet is a creation of the CIA,” which can only make him very suspicious, underlines the political scientist. But the danger, the Kremlin does not see it only on the side of A. Navalny, the West, and the Internet: more and more, the threat and the enemy are young people and even children, writes F. Kasheninnikov.

For years, says this political scientist, the power, which since the 1990s has drawn a line on the youth, has ignored A. Navalny's action had no impact on V. Putin's electorate, composed of adults and the elderly. But the authorities feared that they would become sensitive to the criticism of their children and grandchildren, hence the choice to eliminate the opponent despite the high cost for the Kremlin. Until five years ago, the system could rely on its electoral base, mobilized during the various elections. Now, explains D. Volkov, it must also dissuade or prevent its opponents from participating in the vote, as was seen in 2020 during the widespread consultation on the constitutional amendments, which were validated mainly due to the abstention of opponents to this reform. The rise of the protest leads to a strengthening of the control of the society, notes the sociologist of the Levada Center: personalities like A. Navalny or S. Fourgal - governor of Khabarovsk, who will be removed from office in 2020 - who owe their fame to social networks, are in prison. Suppose there is one area in which V. Putin has become a virtuoso. In that case, he can present an internal conflict as a confrontation with the outside world, analyzes G. Yudin, who expects it to intensify.

"Gradually and quite discreetly, civil society has ceased to be active," notes Pavel Tchikov, which has led to a polarization between the government and the non-systemic opposition embodied by A. Navalny. The few NGOs created in the 1990s, such as the committee of soldiers' mothers, have disappeared. The repression affects not only LGBT groups and human rights associations but also those who, like Marina Litvinovitch, try to protect prisoners against the arbitrariness of the penitentiary administration - an activity that has become very "political" - or the centers that welcome AIDS patients, women victims of violence or drug addicts. The only ones that can continue their activities without any problems are the associations for the homeless. Young people who would like to get involved in these areas now have no alternative but to join the ranks of the political opposition and, in turn, suffer stigmatization and repression, which can be supported by an ever-increasing arsenal of legislation (the recently amended law on "agents of foreigners,” a new law that makes "educational activities" subject to authorization, etc.). According to the sociologist Sergei Medvedev, the term "submission,” borrowed from Michel Houellebecq's novel, characterizes the current situation in Russia. After the brutal repression of the demonstrations at the beginning of the year and the imprisonment of A. Navalny, Russian society is plunged into "conformism" and "passivity.” Because of this apathy, explains A. Kolesnikov, the poisoning of A. Navalny and the revelations about V. Putin's "palace" is perceived in the mode of "infospectacle" without any link with real life.

The lack of prospects in their country makes many young Russians tempted by emigration, observes Alexander Artamonov. With 11 million people, the Russian diaspora is the third-largest globally. Unlike India and Mexico, it is made up of people who are often qualified in the scientific or economic fields. According to official data from Rosstat, in the last decade, the number of annual departures has been growing steadily, from 186,000 in 2013 to 488,000 in 2020. These figures reflect the reality incompletely, emphasizes A. Artamonov: in 2019, according to Rosstat, 7,300 Russians settled in an EU country, while, according to Eurostat, this number is ten times higher (75,700). In 2020, according to European statistics, 76,000 Russian nationals obtained permission to stay in the EU, including 25,000 for family reasons, 12,700 to study, and 19,000 to work. According to a Vtsiom survey conducted in 2020, this desire to leave Russia is widespread, particularly among young people aged 18 to 24: 38% have thought about it, primarily because of the inadequacy of their standard of living, but also, for 22% of them, because of the political situation in their country. Russia will likely lose high-level specialists, especially in new technologies, to the United States, the United Kingdom, the Netherlands, and Germany.

* Bernard LHOTELLIER is a former official of the European Ministry of Foreign Affairs (MEAE).