In 2021, Lithuania commemorated thirty years of membership in the Organization for Securitý and Cooperation in Europe (OSCE), the first international organization it joined following the restoration of its independence. Over three decades, Vilnius has developed a foreign policy there in line with, among other things, its perception of Russian and Belarusian threats. 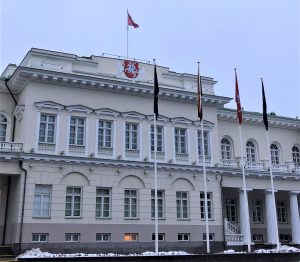 A tool for the withdrawal of Russian troops from Lithuania

In 1991, Lithuania officially regained its independence, and its reconstruction as a nation required the adoption of an independent foreign policy. One of its first achievements was to join the Conference for Security and Cooperation in Europe (CSCE), seen as the primary security forum after the Cold War. The multilateralization of the subject made it possible to obtain written guarantees from Russia, which committed itself to a “rapid, well-organized and complete withdrawal” in a document issued in Helsinki in 1992(1). In the early 1990s, the CSCE thus appeared as a platform from which Vilnius could express its demands to achieve a significant result.

2011: the OSCE chairmanship and the rise of Lithuania's influence

The main goal of Lithuania's foreign policy was to join the Euro-Atlantic institutions, which it achieved in 2004. Lacking major international prospects, Lithuania quickly sought the chairmanship of the OSCE to increase its influence on the world stage. It first expressed the idea of leading the OSCE in April 2003 before formally declaring its intention on July 7, 2004. In 2007, she learned that she would take over the chairmanship in 2011, “a success for the foreign policy of a small state”(2). Presented on January 13, 2011, the official program of the chairmanship is mainly focused on stabilizing its regional environment, which is considered threatened by Russia: the OSCE chairmanship thus appears to be a showcase of Lithuanian foreign policy transposed to a broader scale. For example, the date chosen for the opening speech of the chairmanship is 13 January 2011, a symbolic echo of the commemoration of the 20th anniversary of the attack on the Vilnius television tower by Soviet troops. In his statement, the Lithuanian Minister of Foreign Affairs, Audrionus Ažubalis, emphasized the defense of the rights of the Lithuanian people against the Soviet Union before generalizing his remarks on the respect for human rights(3).

Moreover, Lithuania's leadership in the OSCE has demonstrated that it is capable of opening up to new perspectives in its foreign policy: thus, in 2013, it legitimately took over the presidency of the European Union and then, from 2014 to 2015, obtained a seat as a non-permanent member of the United Nations Security Counciĺ (UNSC).

Therefore, Lithuania is concerned about its security environment and tends to use the OSCE to make its perceived threats multilateral. Thus, through this organization, it seeks to appear as the regional leader in the resolution of frozen conflicts but also as the country that, on European territory, promotes democracy and respect for human rights. It relies on its history as a country that became democratic shortly after its independence. It is about sharing its experience and contributing to the implementation of stable and democratic political systems in its border environment and beyond to contribute to European securitý in the long term.

Since the beginning of the 2000s, Vilnius has said that it perceives Russia as a threat, especially to Georgia and Moldova. In their speeches at the OSCE, Lithuanian representatives denounced the Kremlin’s actions, which did not respect the spirit of Helsinki (sovereignty and territorial integrity). Lithuania supported the process of Euro-Atlantic integration of these two countries to encourage their movement to free themselves from Russian influence. Its interest in Tbilisi, in particular, is reinforced by its action within the group of friends of Georgia created at the OSCE(4). Its commitment to Ukraine is also very significant, especially after the events of 2014: Lithuania not only condemns the annexation of Crimea in the OSCE Permanent Council but also participates financially in the implementation of the OSCE National Dialogue Project in Ukraine, which aims to facilitate exchanges between different parts of society to launch a transition process. On September 1, 2014, Lithuanian diplomat Vaidotas Verba was even appointed to the position of OSCE Project Coordinator in Ukraine. Vilnius’ commitment to the resolution of frozen conflicts is thus broken down into several actions: speeches recalling the violation of the Helsinki principles and calling on Russia to fulfill its commitments, sending personnel to OSCE missions, and finally, transferring funds for the implementation of the latter.

The pacification of the Lithuanian regional environment also requires democratization and respect for human rights in the countries bordering Lithuania, namely Belarus and Russia. Vilnius is mainly involved in implementing a democratic transition in Belarus under the aegis of the OSCE, especially since the controversial re-election of Aliaksandr Loukachenka in August 2020: since then, Lithuania has become the spokesperson of the Belarusian democratic opposition. This role allows it to regularly appeal to the international community through the OSCE to find a solution, which would consist of promoting negotiations between the Belarusian authorities and the democratic opposition to organize a new election under the aegis of the OSCE. At the same time, Lithuania regularly condemns the OSCE human rights violations and attacks on political opponents in Russia.

Lithuania also devotes a significant part of its work in the OSCE to preventing conflicts complicated by the emergence of hybrid threats. Until February 2022, the move away from the risk of conventional conflict has been reflected in strengthening trust and transparency between states regarding their levels of armaments and notification of their military exercises. Lithuania ratified the Open Skies Treaty (OST) in 2004 and contributed to the latest revision in 2011 of the Vienna Document, which establishes security and confidence-building measures(5). Lithuania has complemented its work on conflict prevention by focusing on putting hybrid threats on the OSCE agenda. The safety of journalists, disinformation, cyber security, and energy security was on the agenda of its chairmanship in 2011 and have been a constant focus of Lithuania’s engagement ever since. Lithuania even proposed in 2011 to create an OSCE Task Force on Energy Security (however, this did not materialize) and an informal working group to develop confidence-building measures for cyberspace in increasing cyberattacks, including against Georgian and Ukrainian critical infrastructure. In addition, in 2018, Lithuania, together with France and Sweden, established the informal OSCE Friends Group on the Safety of Journalists.

The limits of the OSCE in ensuring Lithuania's regional security

Lithuania's action within the OSCE must nevertheless be put into perspective, given the influence of NATO and the EU on Vilnius' foreign policy. The first sign of the OSCE's relegation to the second rank of international organizations Vilnius uses is the absence of a permanent Lithuanian representation dedicated explicitly to the OSCE. The low influence of the Organization, compared to NATO and the EU, can be supported by three elements: first, after the Cold War and despite its institutionalization in 1995, the OSCE has lost influence, while some of its prerogatives are now competed by those of the Atlantic Alliance and the European Union. Secondly, the principle of unanimous decision-making makes it challenging to reach a consensus, especially when the member states have different conceptions of security due to their culture and history: the presence of Russia is particularly symptomatic of this phenomenon. Thirdly, the OSCE is a soft international security organization since it does not resort to military force, and Lithuania is seeking military guarantees to deal with Russia and Belarus. In this respect, NATO remains its best shield.

(5) The Open Sky Treaty provides for unarmed surveillance flights over the territories of the state parties. The United States withdrew in 2020, followed by Russia in 2021.