Tens of kilometers of traffic jams at the Russian-Georgian border, hours of waiting to pass through Kazakh customs, and plane tickets from Moscow to Yerevan cost up to $10,000. This is the situation faced recently by several hundred thousand Russian men of military age, desperately trying to flee their homeland to get around the partial mobilization and thus avoid the horror of war on the Ukrainian front. 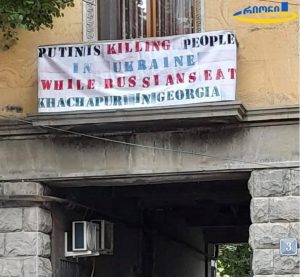 In September alone, more than 222,000 Russians entered Georgian territory, making it one of the most popular countries for Russians fleeing their country after the start of the war in Ukraine and then the partial mobilization. However, Georgia has one significant difference compared to the countries sought by these would-be exiles. In 2008, Russia attacked it, causing a deadly war and occupying 20% of the territory. This aggression gave rise to a strong anti-Russian sentiment among the Georgian population.

Georgia and the reception of Russian exiles

Since 2012, Russian citizens no longer need visas to stay in Georgia. A recent extension of the visa-free period by the Georgian authorities even allows Russian citizens to live and work in Georgia for one year without a visa, compared to 90 days previously. Originally intended to promote tourism, and while Russians represent a significant share of tourists in Georgia, this law now gives Russians access to a freer country unaffected by international sanctions and where the cost of living is relatively low. Therefore, Georgia is a refuge for those who do not wish to fight in Ukraine, whether or not they oppose the authorities in their country.

However, since Russia invaded Georgia, a genuine anti-Russian sentiment has developed in Georgian society. As a result, and because of the similarity of recent events in Ukraine, most of the Georgian population openly supports Ukraine; at the same time, they show little sympathy for the Russians fleeing their country. The manager of a bar in the Georgian capital Tbilisi, for example, is demonstrating the growing mistrust in the country of the flow of ‘occupiers’ into Georgian territory by his actions: he has set up a QR code system at the entrance to his establishment and obliges Russian citizens to fill in a form in which they must, among other things, confirm that they did not vote for V. Putin, whom they condemn. Putin that they condemn Russian aggression in Ukraine wishes “glory to Ukraine,” that Crimea is Ukrainian, that Russia still occupies 20% of Georgia, that they will refrain from speaking Russian, or that, once drunk, they will avoid any political discussion...

More than 20,000 Georgians signed a petition in August calling for a three-month visa-free stay for Russians and Belarusians. According to the Caucasus Research Resource Center, an independent research organization, 66% of Georgians would even favor reintroducing a visa regime for Russians. The opposition is also calling for a return to a visa system for citizens from Russia and Belarus. But the ruling party, Georgian Dream, unofficially led by the country’s only oligarch, Bidzina Ivanishvili, who has a close relationship with Russia, has not agreed to this request. Irakli Kobakhidze, the president of Georgian Dream, said that the border with Russia would not be closed, arguing, among other things, that many Georgians lived in Russia and were likely to return. The entry restriction to Georgia would be a barrier for those “compatriots” who wanted to return home. I. Kobakhidze also recalled the country’s strong economic dependence on Russia, another reason for not restricting Russian access to this small Caucasian country. Finally, he said that Russian migration flows should be kept under control so that they do not pose a threat to the country’s security.

Nevertheless, there are signs of evolution in the authorities’ strategy: on 18 October, Georgian President Salome Zurabishvili declared that faced with the “challenge” posed by this influx of Russians, the government might have to reconsider its liberal visa policy, paving the way for a potential limitation of the Russian flow.

The different routes of exile

In particular, since the announcement of the partial mobilization by V. Putin on 21 September, long traffic jams have been observed on the road leading from the republic of North Ossetia in Russia to the Mtskheta-Mtianeti region in Georgia. Videos showing families and single men on foot or bicycles waiting at customs went viral on social networks. The Russians mainly passed through the Verkhny Lars-Kazbegi checkpoint, the only one on the Russian-Georgian border through which foreigners could enter Georgian territory by land. The air route was also very popular with Russians, despite the 700% increase in the price of flights between Russia and Georgia and the fact that there is no direct link between the two countries (Russians wishing to reach Tbilisi must go via Yerevan, Minsk, Istanbul or Baku).

Migrants can also flee to South Ossetia or Abkhazia, two territories occupied by Russia. However, this strategy then blocks their access to Georgia, as Tbilisi considers it illegal to enter via this route and prohibits passage through these regions to reach Georgia. Moreover, as early as 24 September, the independent Russian media outlet Meduza claimed that the Kremlin was planning to mobilize citizens from Abkhazia and South Ossetia. This announcement should have invited Russian migrants to avoid these two entities. However, it turns out that almost 2.5 million Russian citizens crossed the Abkhazian border in the third quarter of 2022, nearly three times as many as in the first quarter. However, these figures published by the FSB Customs Service should be treated with caution as they indicate the number of border crossings from all causes, not the number of people who migrated to Abkhazia.

While Georgia offers a respite to Russians in exile and allows them to reflect on their plans, the number of Russians settling for a long time in a third country - including Georgia - is not yet known. According to the Eurasianet website, since the call for mobilization, there has been a steady and sustained flow of Russians entering Georgia daily, but this is partly offset by an outflow of Russians leaving Georgia each day: Zurabishvili estimates that since the partial mobilization, 700,000 Russians have entered Georgia, of whom 100,000 were still in Georgia in mid-November. According to the Georgian Interior Ministry, as of 27 October, 112,733 Russians had settled in Georgia since January 2022. This would represent 3.05% of the total population of the country. These figures should be seen in the context of the 30,000 Russians who arrived in Georgia between the end of February and mid-March (not all of them stayed).

The departure to Georgia of many potentially mobilizable personnel alerted the Russian military authorities, who quickly set up a checkpoint at the border. Thus, from 27 September to 21 October 2022, mobile operational groups of representatives of military registration offices were positioned at the Verkhny Lars checkpoint and the Nizhny Zaramag checkpoint, the latter leading to the occupied zone of Tskhinvali (South Ossetia). Thanks to this arrangement, they could issue more than 180 summonses to reservists who wanted to leave the country, a deficient number compared to the number of border crossings over the same period.

Despite the few demonstrations organized by small hundreds of Russians in exile in Tbilisi to condemn Vladimir Putin’s invasion of Ukraine, the graffiti “Russians - go home” has flourished on the walls of the capital, revealing the reluctance of a part of Georgian society to welcome and allow the integration of these exiled but little mobilized Russians. Some Georgians note that most Russians behave as if they were unaware of having found refuge in a country whose territory is occupied by Russia. This makes it difficult for many Georgians to express empathy with these exiles who are not concerned with the geopolitical problems caused by their country in its neighborhood. They are, therefore, not very inclined to make the life of these Russians who are passing through Georgia - for a longer or shorter period - comfortable.

Politics is not the only reason for the moderate enthusiasm of the Georgian population: the influx of people has a significant economic impact on the host country. In particular, the concentration of Russians in Tbilisi (where almost a third of the Georgian population lives) has led to a significant increase in the cost of living in the capital. Rents have practically doubled, and the price of many goods has increased significantly. As a result, many Georgians have been forced to change their housing or even return to their parental homes. The arrival of thousands of Russians fleeing their country’s politics has a direct and personal impact on the daily lives of thousands of Georgians. Especially since the latter is not directly and immediately interested in the fact that this immigration of primarily young and well-educated Russians also brings economic benefits: according to Transparency International, nearly 6,400 new Russian companies were registered in Georgia between January and June 2022, i.e., seven times more than in 2021.

* Fantine SCHWARTZBROD is an M2 student in International Relations at INALCO, specializing in studying the post-Soviet space.