That France and Estonia are close allies may seem disconcerting at first glance. France has shown little interest in the Baltic region throughout its history. As for Estonia, to counteract any Russian ambition, it has tended since the 1990s to orient its foreign policy towards the United States and the United Kingdom and the countries of the European Union’s Eastern Partnership (Ukraine and Georgia in particular). However, since France’s return to NATO’s integrated command in 2008, defense relations between Paris and Tallinn have strengthened considerably. 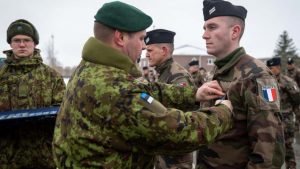 Over the past twenty years, a relationship of trust has gradually been built between France and Estonia, based on a strong convergence of interests. Thus, there are numerous high-level visits between the two countries (for example, Estonian Prime Minister Kaja Kallas will come to Paris in November 2021). The French army is actively involved in defense of Estonia, and Estonian soldiers have been engaged in Mali since 2018.

A closer alliance since 2009

France's return to NATO’s integrated military command in 2008 prompted Estonia, which places Atlanticism at the heart of its foreign policy, to move closer to Paris. Defense relations between the two countries are now structured around two operations: NATO’s Enhanced Forward Presence (eFP) and, to date, the Takuba Task Force in Mali.

At the 2016 Warsaw Summit, the Allies decided to deploy a military presence in Estonia, Latvia, Lithuania, and Poland to protect NATO’s eastern flank. Thus, 300 French soldiers have been stationed at the Tapa camp on several occasions as part of this reinforced forward presence (eFP). French troops have been deployed there three times, in 2017, 2019, and since May 2021. Until the beginning of March, twelve Leclerc tanks were participating in this deployment and armored vehicles. In the meantime, French forces were deployed in Lithuania in 2018 and 2020. Due to Russia's invasion of Ukraine on 24 February 2022, France decided to perpetuate its presence, which until then had been rotational, in Estonia. Thus, 200 alpine fighters were sent to Tapa at the beginning of March to take over from the 300 soldiers present since last spring.

Moreover, the Baltic States, which do not have significant air forces, are vulnerable to incursions by Russian aircraft. NATO has been deploying air forces there since 2004 as part of the Baltic Air Policing to protect their skies. France has been regularly involved in this mission. Mirage 2000s were deployed to Ämari in 2018 and 2020. In 2022, the deployment of four Mirage 2000 initially planned for April was brought forward by one month due to the increased Russian threat.

Estonia has been helping France secure the EU’s southern flank by sending soldiers to Mali since 2018. Estonia was the first EU member state to provide significant support to France, first in Barkhane and then in Takuba. On July 14, 2021, Estonian troops even marched in front of President Macron on the Avenue des Champs-Élysées with other European Takuba contingents. At its peak, the Estonian contribution amounted to 95 military personnel. The number of Estonian soldiers involved in this operation may seem minor. Still, it is a significant part of an Estonian army with only 6,300 soldiers, including 3,000 conscripts who cannot be involved in external operations. Faced with the hypothetical and then real irruption of Russian fighters in the Malian theater, the Estonian government hesitated about the line to take. At first, Defence Minister Kalle Laanet announced that Estonia would not accept fighting in Mali simultaneously with Wagner’s mercenaries. Then he did an about-face in January 2022. Finally, with the announcement of Takuba's disbandment in February 2022, Estonia withdrew from Mali. The future of Estonian-French cooperation in West Africa is uncertain at this time.

In addition, Estonia is the only Baltic country that has joined the European Intervention Initiative (EII), announced in September 2017 by Emmanuel Macron, which aims to define a common European perspective on international security issues. The initiative includes nine countries, including the United Kingdom.

These ad hoc cooperations were given a general framework in October 2020, when Estonian Prime Minister Jüri Ratas and the French President signed a strategic partnership in Paris. This document endorses the Estonian-French alliance and a shared vision of Euro-Atlantic institutions.

While the foreign policy of Stenbock House, the seat of the Estonian government, is mainly focused on the United States, the United Kingdom, and NATO, Paris now also appears to be an ally that should not be overlooked. Indeed, the Trump parenthesis and Biden”s Chinese priority have instilled doubt about the American security guarantee. The “Global Britain” strategy promoted by Boris Johnson has raised fears of a British disinterest in continental affairs. Thus, a strengthening of ties with France balances the Estonian system of alliances. As the continent's leading military power, a permanent member of the United Nations Security Council, and a nuclear-armed country, France is a reliable alternative partner.

By strengthening its cooperation with Western European powers, Estonia also seeks to anchor them in the eastern flank of NATO, as outlined in the October 2020 bilateral strategic partnership, which sets as its objectives “to continue to work for democracy, prosperity, and stability in the EU's neighborhood within the framework of the Eastern Partnership. To commit to a balanced development of our relations with our neighbors to the East and South and to pay particular attention to the Eastern Partnership and the Union for the Mediterranean”.

From Paris, the perspective is quite different. France wishes to advance its concept of European defense and share the burden of its commitment to Africa. The Takuba force has emerged as a means to achieve both objectives. The dispatch of French troops to Estonia, a reassurance operation, demonstrates France's commitment to the security of the Baltic States and the whole of Eastern Europe. It is also a sign of France’s permanent commitment to NATO. In contrast, Emmanuel Macron's statements on the brain death of the Alliance in 2019 may have raised questions among the leaders of the Eastern flank countries and France's ambiguous transatlantic history.

France’s promotion of European strategic autonomy is sometimes perceived as a challenge to NATO. Being involved in Estonia gives credibility to the French approach by demonstrating in concreto the possibility of an autonomous Europe. At the same time, since the French presence is within the Atlantic framework, Paris can devitalize the argument that strategic autonomy and transatlantic relations are antithetical.

Specific military issues are also at the heart of the Franco-Estonian partnership. The French high command is trying to adapt the armies to high-intensity combat. The eFP is a tool to achieve this, with exercises mainly focused on a confrontation between two state entities. For Estonia, Mali is a terrain on which to train its defense forces in the event of an attack.

Despite these strong ties with France and the uncertainty surrounding the transatlantic relationship, the most critical chapters of Estonian foreign policy remain to maintain relations with Washington and participation in the Alliance.

The maintenance of territorial integrity remains strongly linked to the vitality of ties with the United States; the only country deemed capable of effectively protecting Estonia from its eastern neighbor. The partnership with Washington is still strong. For example, in 2020, Congress provided a $169 million grant for the defense of the Baltic States as part of the Baltic Security Initiative. As for the United Kingdom, it is more committed than France to the Baltic. It is also the framework nation for the eFP in Estonia. London also leads the Joint Expeditionary Force (JEF), a rapid reaction force based on a politico-military agreement with the Baltic and Nordic countries.

Sometimes, differences between its most important allies put Tallinn in an uncomfortable position. During the Australian submarine crisis between France and the United States, Estonia was torn between its partners. Foreign Minister Eva-Maria Liimets cautiously noted that “To assess the situation properly, we would certainly need more information; we have seen that France is very disappointed in this matter. Therefore, we can assume that there has been a misunderstanding somewhere,” before adding: “We are concerned that these measures will lead to tensions within NATO. For us, NATO must be united”.

Thumbnail: In Tapa, a French soldier from the Lynx mission deployed in Estonia receives an Estonian commemorative medal on February 18, 2022 (source: French Ministry of the Army).

* Louis Pernotte is a 3rd-year student at Sciences Po Rennes and a student of civilization "Baltic Europe" at Inalco. He is particularly interested in issues related to European defense.