The new National Security Strategy of the Russian Federation of July 2, 2021, announces a turning point in Russia's posture towards the Asia-Pacific. Does this change in the texts reflect a reality that will happen? 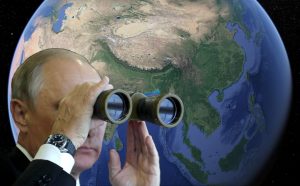 Russia has often demonstrated its willingness to reach out to Asia. It became a dialogue partner of the Association of Southeast Asian Nations (ASEAN) in 1996 and joined the Asia-Pacific Economic Cooperation (APEC) in 1998. Following the international financial crisis of 2008, which shook people's confidence in the Western model, Vladimir Putin announced a "pivot to Asia" in 2011, which was accentuated by Western sanctions after Russia annexed Crimea in 2014. However, many authors have argued that this change in strategy was more rhetorical than substantive. Despite these declarations, Russia is and would remain European and would not have the means to fulfill its ambitions towards the East(1).

However, Russia has made significant progress in forging closer ties with several Asian countries in recent years. Published on July 2, 2021, Presidential Order No. 400, which defines the new National Security Strategy of the Russian Federation,(2) reflects this evolution by making cooperation with the Asia-Pacific region - particularly with India and China - one of the priority objectives of Russian foreign policy. In a context where Asia now represents the world's new economic and demographic center, we must examine the ins and outs of Russian strategy in this region.

A pivot to China rather than to Asia?

Economically, Russia has found the Asian market an effective alternative to the Western sanctions of 2014. The European Union (EU), which accounted for 40.6% of Russia's exports in 2020 (and 35.5% of its imports), is still its largest market. Still, its relative weight has declined in favor of Asia(3).

On a state level, China is indeed now Russia's largest trading partner, accounting for 14.6% of its exports and 23.7% of its imports. Since 2019, Moscow and Beijing have repeatedly stated their desire to double their trade to $200bn by 2024. Strategically, Russia is China's leading arms supplier (70% of its arms imports)(4). Russian Foreign Minister Sergei Lavrov recalled on 12 October that Moscow considered Taiwan to be an integral part of the People's Republic of China. A few days later, under the astonished eye of Japan, the two countries carried out a joint naval patrol for the first time, sending warships to the Tsugaru Strait. Some analysts speak of a Russian pivot towards China rather than Asia, given this rapprochement.

However, the relationship between the two countries is characterized by a strong asymmetry: in 2018, trade with Russia represented barely 0.8% of China's total trade. Therefore, Russia is cautious about its growing dependence on China: some joint projects (notably China's New Silk Roads initiative) are struggling to come to fruition, while Moscow is visibly seeking to develop its relations with other Asian countries to diversify its partnerships expand its sphere of influence.

Relations between India and Russia have thus become much more robust in recent years. Russia has even become India's leading partner in defense: trade between the two countries has increased from $2-3 billion in 2018 to $9-10 billion in 2021. In particular, Russia signed its largest-ever contract to sell Kalashnikov AK-203s in early December, with an order for 700,000 assault rifles for the Indian armed forces. In 2021, India and Russia also conducted joint military exercises (INDRA Navy and INDRA Army), and India participated in Russia's Zapad exercise and the Shanghai Cooperation Organization's (SCO) Peace Mission exercise held in Russia.

On December 6, 2021, V. Putin and N. Modi met in Delhi for their annual summit, while their Ministers of Foreign Affairs and Defense held a meeting in "2+2" format. Some twenty cooperation agreements were signed on this occasion in all fields (trade, energy, science and technology, intellectual property, outer space, geological exploration, cultural exchanges, education, etc.).

Russia has also demonstrated its willingness to deepen its relations with Southeast Asian countries and, to this end, has increased its participation in forums organized in the region. At its last summit with ASEAN, on 28 October 2021, a Comprehensive Plan of Action was drawn to intensify cooperation in various sectors, including energy and armaments (Russia is the leading supplier of arms to the region, ahead of the United States).

In particular, Russia has strengthened its economic partnership with Vietnam, as evidenced by the signing in 2015 of a free trade agreement between the latter and the Eurasian Economic Union(5). From 2020 to 2021, trade has doubled, to the point that Russia is now the leading meat supplier to Vietnam. In June 2021, the Russian Defense Minister met with his Vietnamese counterpart: the Kremlin intends to sell Vietnam a fifth-generation Checkmate fighter jet worth $25-30 million. According to some analysts, this rapprochement could also allow Russia to regain control of a former Soviet military base in Cam Ranh Bay(6).

While the strengthening of relations between Russia and the Asia-Pacific thus appears undeniable, many analysts nevertheless put the idea of a "pivot to Asia" into perspective by mentioning the limits of partnerships that are ultimately not very successful and very unequal depending on the country. Russia's internal problems (red tape, poor infrastructure, and corruption) are put forward to explain these limitations, as well as a "short-term" foreign policy(7).

It is important to note that Russia's strategy plays all sides without denying these analyses. In March 2021, Alexander Yakovenko, the former Russian ambassador to the United Kingdom, deplored the erroneous image of Russian foreign policy conveyed by the media: the latter focuses exclusively on tensions with the United States and the EU and problems within the post-Soviet space, whereas one of the basic principles claimed by Russian diplomacy is "multi-dimensionality"(8): Moscow wants to break out of the Western binary scheme pitting the United States against China in a strategic and trade war that requires a country to choose aside. On the other hand, Russia would prefer "multifaceted" relations with Asia-Pacific countries (as V. Putin put it at the Asia-Pacific Regional Forum). If it does not develop natural alliances, it is because - apart from the fact that it would not have the means to do so - this would contradict its ideal of a multipolar world respecting the sovereignty of states. The strengthening of its relations with both China and India (enemies in the region) and with the countries of Southeast Asia illustrates this strategy. Therefore, these relations are often limited to economic and security interests, but they allow Russia to maintain its political independence while creating a network of influence. It is thus unlikely that Russia will join China in a possible war against Taiwan(9).

This strategy is paying off: when the United Nations voted on a resolution condemning the annexation of Crimea in 2014, Vietnam, Brunei, and Cambodia abstained, and Laos unfortunately "forgot" to vote. In addition, Russia's rapprochements with China and India (part of the Quad, a strategic alliance with the United States, Australia, Japan) create an atmosphere of uncertainty for Washington.

Arms stretched towards Asia; eyes turned towards the United States?

Although implicit (the United States and Europe are mentioned less than five times), opposition to the West is omnipresent in the new National Security Strategy. From the very first lines, Russia recalls its commitment to "pursue an independent foreign and domestic policy and to counter any attempt at external pressure effectively. Paragraph 7 denounces "the desire of Western countries to safeguard their hegemony," while paragraph 19 states that "in the context of the crisis of the Western liberal model, several states are trying to erode traditional values deliberately, distort world history, reconsider Russia's role and place in it, rehabilitate fascism and stir up inter-ethnic and inter-faith conflicts. Information campaigns are conducted to create a negative image of Russia. The Russian language's use is restricted, Russian media's activities and Russian information resources are prohibited, and sanctions are imposed on Russian athletes. The Russian Federation has been unjustifiably accused of violating international obligations, conducting cyberattacks, and interfering in the internal affairs of foreign states. Russian citizens and compatriots living abroad are discriminated against and openly persecuted."

If Russia’s strategy in the Asia-Pacific results in an apparent strengthening of relations with the region’s countries, thus still seems linked to a more global process of opposition to the West. Russia is constructing itself in opposing relation to the "West,” It objects to a different vision of the world order and other values. Its initiatives favoring a rapprochement with Asian countries often respond to Western threats (economic sanctions, the signing of the AUKUS Pact on 16 September 2021 between the United States, the United Kingdom, and Australia, which risks reducing its role in the region, etc.).

As elsewhere in the world (we could mention the African continent), Russia is settling as soon as it can into the cracks left open by the West, developing what could be described as a "strategy of opportunism.” It is thus subtly placing its pawns in Asia-Pacific. It probably does not have the means to compete with China, but this is not its ambition, unlike its American competitor.

(5) The Eurasian Economic Union (EAEU), which came into effect on January 1, 2015, aims for greater regional integration between Russia, Belarus, Armenia, Kazakhstan, and Kyrgyzstan.

* Solène LARTIGUE is a Master 2 of International Relations student at Inalco (Paris).