By authorizing the opening of a Taiwanese representative office in Vilnius in November 2021, Lithuania has exposed itself to the anger of China, which has since multiplied its retaliatory measures against it. This rapprochement with Taiwan is ideally in line with Lithuania's new diplomacy. 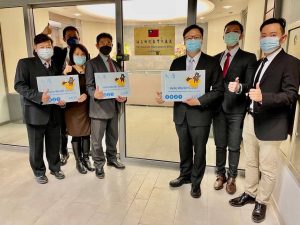 Since the 2016 election of President Tsai Ing-wen, China has embarked on a campaign of pressure to isolate Taiwan. A sovereign state with minimal international recognition and primarily excluded from international organizations, Taiwan remains an essential partner of the European Union. With the rise in Sino-American tensions and the coronavirus crisis, relations with Taiwan have returned to the forefront. Without going so far as to renounce its one-China policy, Lithuania decided in 2021 to allow the opening of a Taiwanese representation in its name, arousing the ire of Beijing.

Taiwan was integrated relatively late into the Chinese empire: the island was formally attached to the kingdom only in the 17th century. During the period known as the Zheng thalassocracy (1661-1683), Taiwan knew a loyalist regime towards the Ming dynasty, overthrown by the conquest of the Manchus, who established the Qing dynasty in 1644, then definitively eradicated in 1662; the island was then pacified and integrated into the Manchu dynasty in 1683. On April 17, 1985, following the first Sino-Japanese war, the Treaty of Shimonoseki was signed, amputating the Qing Empire from Taiwan ceded to Japan. At the end of the Second World War, following the surrender of Japan, Taiwan was returned to China, which in the meantime had experienced a change of regime and became the Republic of China. The end of the war also saw the end of the united front in China between nationalists and communists against the Japanese invader’s common enemy. The civil war between the two sides resumed in 1945 and led to the victory of Mao's communists on the mainland and the withdrawal of Chiang's nationalists to Taiwan in 1949. From then on, the two regimes of the Republic of China and the People's Republic of China coexisted, each claiming to be the sole legitimate representative of all of China. However, Taiwan's position on this issue has changed since the democratization of the island in the 1980s. Little by little, Taiwan has lost its diplomatic allies (in 1964 for France). In 1971, the Republic of China also lost its seat as a permanent member of the Security Council to the People's Republic of China and its representation at the United Nations (vote of resolution 2758 by the General Assembly on 25 October 1971). Nixon’s visit to Beijing in 1972 began a rapprochement with the United States, heralding Washington’s recognition of the People's Republic of China in 1979. That same year, the Taiwan Relations Act defined relations between the United States and Taiwan. Despite differing interpretations, the 1992 consensus then laid the foundation for a new cross-strait dialogue around a supposed recognition by both sides of the existence of one China. However, since 2016 and the election of Tsai Ing-wen (Democratic Progressive Party) as Taiwan’s president, who does not recognize the 1992 consensus, cross-strait relations have deteriorated. Since then, China has been increasing pressure on Taiwan.

As a result of poor cross-strait relations, while the Democratic Progressive Party was in power from 2000 to 2008, Taiwan lost diplomatic allies. From 2008 to 2016, when the Kuomintang, which favors a rapprochement with China, was in control, the friendliness of cross-strait relations allowed Taiwan's diplomatic situation to stabilize. During this period, Taiwan is also invited to participate annually as an observer in the World Health Assembly, the supreme decision-making body of the World Health Organization, and Presidents Ma Ying-jeou and Xi Jinping go as far as meeting on November 7, 2015, in Singapore. But since 2016 and the return of the Democratic Progressive Party to power, China has resumed its strategy of removing diplomatic allies from Taiwan. Through this coercive policy in the diplomatic and economic spheres and disinformation campaigns, Beijing hopes to influence the direction of Taiwanese policy. This approach failed in 2020 when President Tsai was re-elected, setting a record for the number of votes in the history of Taiwanese presidential elections. This score illustrates the counterproductive nature of Chinese policy.

The effect of the 2019-2020 demonstrations in Hong Kong and the apparent failure of the “one country, two systems” model, which is very strongly repulsive, must also be taken into account (the Kuomintang presidential candidate, Han Kuo-yu, even spoke out during the campaign against the application of the "one country, two systems" formula in Taiwan).

Lithuanian diplomacy and rapprochement with Taiwan

On July 20, 2021, Taiwanese Foreign Minister Joseph Wu announced the opening of an unofficial embassy in Vilnius, which opened on November 18. Named the Taiwanese Representative Office in Lithuania, it joins the 30 other establishments (embassies and official and unofficial consulates, including Moscow and WTO) located on the European continent, the last of which was opened 18 years ago in Slovakia. The opening of a Lithuanian trade office in Taipei is also planned. These developments have been called a major diplomatic breakthrough by President Tsai. They follow Lithuania's withdrawal from the 17+1 Format promoted by China, announced in May 2021, and accompanied by an appeal from Vilnius to other member countries to do the same. This move provoked strong reactions from China, which recalled its ambassador in Vilnius on 21 November, leaving only a chargé d'affaires there (Lithuania made the same move).

The virulence of the Chinese reaction is explained in particular by the name of the Taiwanese Representative Office in Lithuania, whereas China tolerates the name of Taipei. Thus, it is under the name of Chinese Taipei that Taiwan participates in international sporting events such as the Olympic Games.

Since July 2021, Lithuania has gained considerable visibility in the Taiwanese media landscape. This is also due to Lithuania's donations of the Covid-19 vaccine (20,000 doses from AstraZeneca were announced in June 2021, followed by 235,900 in September).

Vilnius tends to downplay the effect of Beijing's retaliatory measures by Lithuania's low economic and trade dependence on China, as well as by the new opportunities that deeper bilateral cooperation with Taiwan will offer, especially in the field of semiconductors: Taiwan has indeed announced that it will send a team of semiconductor experts to Lithuania in the first half of 2022, as well as launch a training program for Lithuania, with 20 scholarships offered in 2022 for Lithuanian semiconductor professionals to come to Taiwan for further training. In mid-January, Taiwan announced the creation of a $1 billion fund to support joint economic projects. In addition, to help it deal with the organized migration crisis on the border with Belarus, Taiwan offered Lithuania ten drones for police operations and 400 eco-responsible blankets on October 27.

In this deepening of relations with Taiwan, Lithuania has received the support of the United States (expressed in particular on September 15, 2021, during the meeting in Washington between U.S. Secretary of State Antony Blinken and Lithuanian Foreign Minister Gabrielius Landsbergis), as well as that of members of the European Parliament. They have called for a firmer response from the European Union and NATO to Beijing's economic and political pressure against Vilnius. On January 27, 2022, the EU announced that it was taking China to the World Trade Organization (WTO) for discriminatory practices against Vilnius.

Lithuania's withdrawal from the 17+1 group, its rapprochement with Taiwan, its sharp criticism of the Kremlin's policies, and its welcoming of representatives of the Belarusian opposition on its soil confirm and strengthen Lithuania's diplomatic approach, based on principles and values. This ambitious policy on the international scene goes far beyond what would be expected of Lithuania, given its size. Among other attacks, China is now accusing Vilnius of playing Washington's game and forcing the European Union to take a stand in the name of its famous principles and values and solidarity among member states. Lithuania is one of the most Atlanticist countries in the EU. Its rapprochement with Taiwan can also be seen as a testament to the United States, which is currently seeking to unite democracies in the context of rising tensions with China. With the AUKUS pact, in addition to the technological option of nuclear propulsion, which can be criticized from the point of view of proliferation, Australia has chosen another strategic alliance at the expense of France. Thus, this setback suffered by French diplomacy can be seen as the result of a summons from the Anglo-Saxon countries and to the European countries to position themselves about China. But there are also forces within the European Union pushing it in this direction. Lithuanian diplomacy is a recent example.

- Tim Stickings, “Europe divided on plans for its own army after Aukus submarine row,” The National, October 6, 2021.

* Raphaël Nathan is a student of Master 2 International Relations at Inalco (Paris).